That's what the architects and engineers for the Rolex Learning Center exclaimed at the end of May when the small shell finally shed its formwork. The first stage of this technological marvel has been a success. The high quality of the work by all the teams on the site has contributed to this and congratulations are in order. But work remains before the final victory, from the lower floor where the concrete must still be poured for three slabs out of the total of 36, to a multitude of small, varied tasks that are necessary to meet Minergie norms.


The small shell, freshly finished, has already served as an umbrella for the workers, who celebrated with a giant paella during a brief construction pause before starting the next battle: the large shell! The center is well ahead of the building calendar but no one is easing up for this next major challenge: the iron workers, the cement pourers, the people hosing down the cement to make sure no structural deformations appear under the influence of summer heat. All systems are go in terms of safety and making sure the project moves along smoothly. And what a project! Some 4,300 m3 of cement poured in one go in less than 48 hours (11-13 July). Now we're waiting for 70 journeymen to add their skills to those of the 50 already on the work site.


In one corner of the building site a team of specialists from several fields is already poring over the next set of challenges ! once the two shells are poured and their forms removed a roof will need to go up, right? For now, the main concern is finding the best solutions for the structural test, on the order of 180m2! 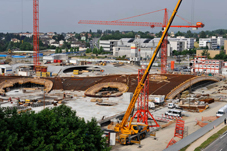 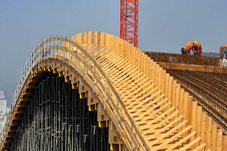 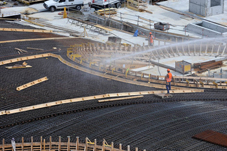 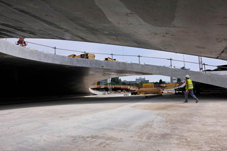