Changing Service - no more posts here
(category : me)
After seeing what nice layout options Blogger has, I decided to move my blog there.

This means there will be no more postings here, starting with tomorrow you will find the "Letters from Lausanne" here: http://borislegradic.blogspot.com/

See you there,
Boris
Posted by Boris Legradic at 14:42
Tea II
(category : me)
Inspired by my calculation of the average cost of a cup of tea, I went to the nice little tea shop théNtee (don't ask me about the N, nobody seems to want to talk about it) on the Ruelle Grand Pont, which has a very nice and helpful Chinese lady inside. The tea selection is not too big, but they do have Phoenix Pearl Jasmine tea, as well as Lung Ching green tea. If you know a bit about tea, then you know that I splurged a bit. I left the shop 46 CHF lighter, happy owner of 200g of Camellia sinensis. Ahhh, after three weeks of drinking infused grass clippings, a nice cup of tea will make your day.

Plus I learned something new: Apparently the little cloth-tea bags are not ideal for making green tea, because the pores are too small. You should use those metal sieve-thingies, or, even better, nothing at all. I bought one of those cloth-bags after all, because it will fit in my Thermos at the EPFL, where I can't just throw the tea in loose, because it might steep for hours. 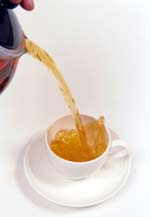 Posted by Boris Legradic at 8:24
Tea
(category : me)
I have regressed into tea-drinking once more. Probably because I am in Switzerland, although that doesn't make any sense. But then again, neither does the Chewbacca defense.

Currently I am drinking "Tea Time"TM green tea. That's the only green tea I could find in the local supermarket, and it tastes almost exactly like the magic potions you used to brew up as a kid, i.e. wet grass. Sometimes, when I get frisky, I drink some Earl Gray, but most of the time I limit my caffeine intake to three or four cups of coffee in the morning, and one or two in the afternoon. (I know, I know, green tea also contains caffeine, but it has only a sixth of an equivalent amount of coffee) The rest of the day I swill cup after cup of soaked grass clippings.

But not any longer, because I squirreled the location of a tea-shop of some repute out of Alan, our local Englishman. Soon I will go there and buy loads of expensive tea (Which isn't as expensive as you would think - if you pay 20 Euro (Yes, I still think in Euro, shame on me!) for 150g, then that is about a hundred tea bags. Tea of this quality can be brewed up at least four times (indeed, Chinese snob-tea-drinkers throw away the first infusion), so you have about a hundred liters of beverage, or 20 cents per liter. You'd be hard-pressed to find bottled water that cheap!

Come to think of it, I will probably splurge and buy some really good jasmine tea... 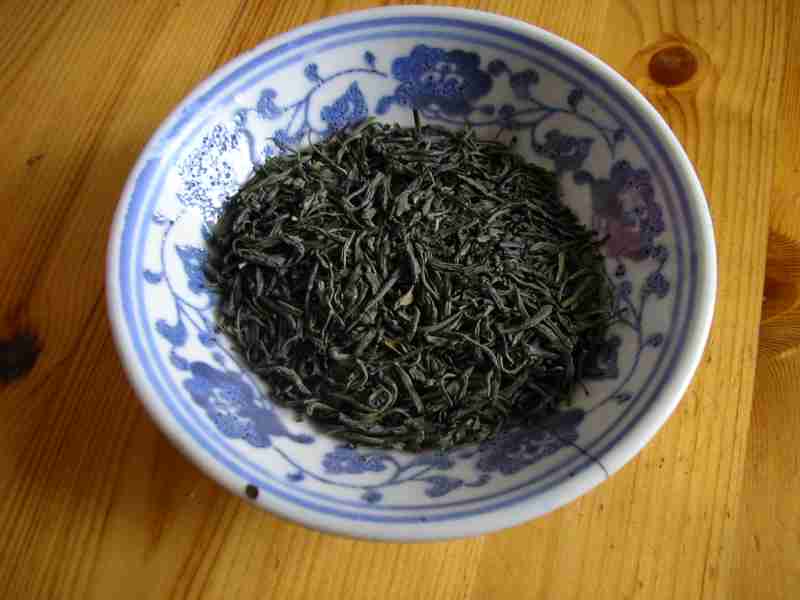 Posted by Boris Legradic at 8:16
Vo Vietnam
(category : me)
I was in my first Vo-Vietnam lesson the other day...

Hold on. Why, the gentle reader may ask himself, does he always write 'the other day', and never yesterday, on Monday, etc.? The answer to that is that I am tricky, lazy and an inconsistent writer. My stated goal for this blog is to post once per day, every day. However, I am often too lazy to write something in the morning (or in the evening), either because I have not yet had my 4th cup of coffee, or my 3rd cup of tea (first coffee, then tea), or because the day was too strenuous, or too boring, or... And if I do sit down to write I cannot think of anything that would hold anybodies interest any amount of time anyway.

So what I do is if and when the muse strikes me, I tap out four or five blarticles, and save them in Blog/unused. And to insidiously hide this truth from you, I say, 'the other day' and not 16th of march, so that when you read this blarticle you will not immediately think "old news" and flee. This strategy is of course rendered ad absurdum, 'cause I have spilled the beans, but sic transit gloria mundi. (You have to imagine the barefooted monk - if you want, you can also burn a piece of flax for extra credit.)

To return to the other day, I was in my first Vo-Vietnam lesson from 1215h to 1345h. When I first saw that you could learn Vo-Vietnam in Lausanne, I was tickled pink over it. I am somewhat interested in Martial Arts, and did some Tae Kwon Do a couple of years back, some Judo even farther back, and some indifferent Hapkido and a smattering of Kung Fu in between then and now. And I had never even heard of Vo-Vietnam. So I went there (marvelous sport system here at the EPFL, you pay 50 CHF -gratuit pour les etudiants - and then you can visit as many courses as you want and have time for) and had a look. And the moves are really, really different from anything I have done so far. Also, I am horribly out of shape, fat, lazy, unsupple as a stick (a really old, rotten one), and to add insult to injury I seem to have lost what little coordinated I had. But it is a really awesome course, and I will be there twice a week, and I just might inscribe at the school proper, to go one evening per week as well.

So what is Vo Vietnam? Well, actually the name of the school, and of the style, is Ecole Son Long Quyen Thuat, with a couple of scratch marks and dots over the vowels, which I cannot render here. But because of PR it is called Vo-Vietnam, which means 'Jumping Grasshoppers of Korea'.

Kidding, kidding. Vo-Vietnam means the Art of War of Vietnam, and at higher levels there's also sticks, lances, swords and stuff. There is also an appropriately old founder (94 I believe) and a logo with a dragon, everything the prospective martial arts student needs.

Posted by Boris Legradic at 9:08
Tai Chi Chuan
(category : me)
The other day I had my first Tai Chi class.

I first came in contact with Tai Chi a couple of years back, when it turned out that one of the students in my Tae Kwon Do class had studied under Grandmaster Li Deyin, the trainer of the chinese national team. He offered to teach us, and some accepted, but silly me decided that it was too boring.

I have since come to regret that decision immensely, because not only have I come to appreciate the flowing movements of Tai Chi, most of them are also extremly effective self defence techniques, relying on minimal movements and shifting your center of mass instead of punches and kicks.

Anyway, now I will get up at 6 o'clock each Tuesday (and how's that for commitment?) and go and learn from master Chaibi. Who's not from Asia, but satisfies the stereotype of a martial arts master by being old and spry.

Posted by Boris Legradic at 8:12
My office
(category : me)
'Tis my office, at the CRPP in Lausanne. Right besides me is a TOKAMAK fusion research reactor, but it is undergoing maintenance work until 2008, which means my own plasma reactor (for plasma processing, not fusion, alas!) is much cooler, so there!

See more of the scenery at Google Maps . 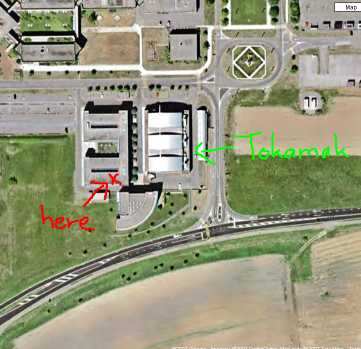 Posted by Boris Legradic at 15:15
Why I love the EPFL
(category : me)
The perks for working at the EPFL, viz. the tea-kitchen. Note the different diameters of the pipes... 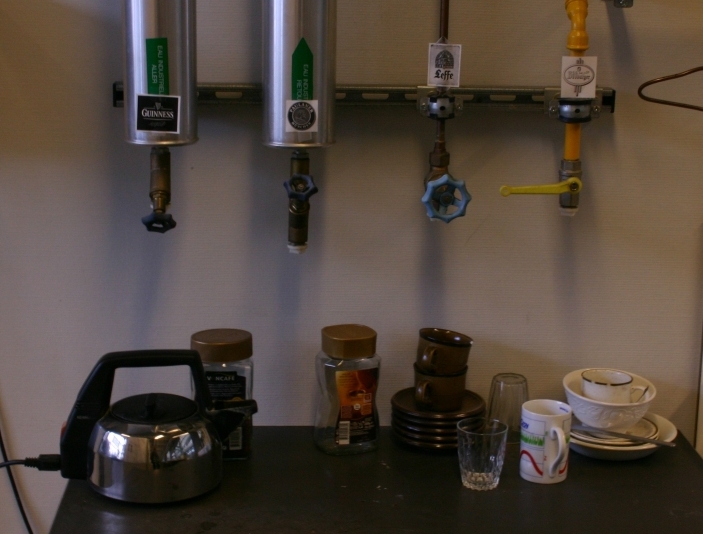 Posted by Boris Legradic at 15:32
Welcome to my house
(category : me)
Come freely. Go safely. And leave some of the happiness you bring!

Illuminated by a 40 Watt bulb (higher wattage fries the lamp), this 24 m^2 palace will be my abode until Charlotte and I can find something else. Anything else. 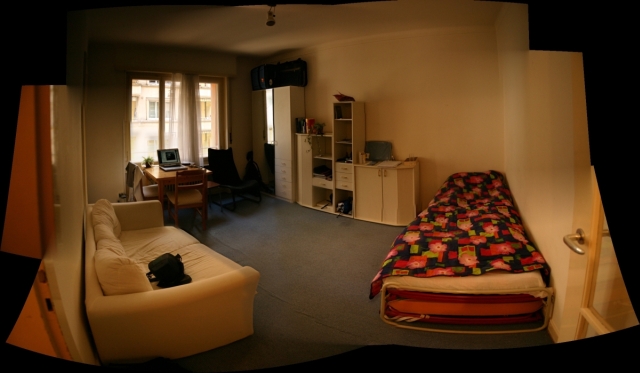 Posted by Boris Legradic at 9:08
Comments (2)
Arrival
(category : me)
Arrived in Lausanne on march first, in the morning. And this is where I will live the next three months... 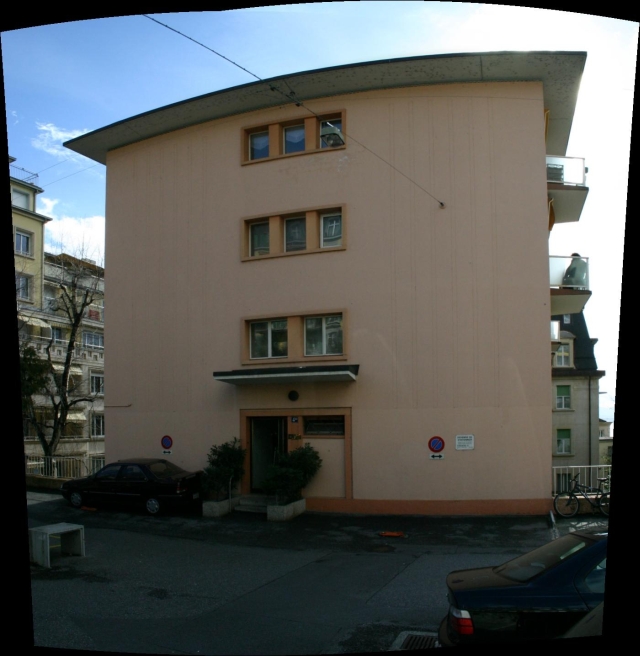 Posted by Boris Legradic at 8:56