Prof. Anastasia Ailamaki presented our lab's research in the KTN talk: Data on the Shore: How efficient hardware and good communicant lead to the fourth paradigm.

We are in the era of data deluge: Everyone complains about how much data they have and how they feel there's useful information hidden within, but they are not sure what it is or how to get it. The DIAS Squad comes to the rescue in two ways. Firstly, through building efficient data management systems, we harness the underlying hardware's storage and compute capabilities. We redesign data management software with hardware particularities in mind, but at the same time we explore radically controversial approaches, such as in-situ querying of data without first loading it into the system. Secondly, through systematic communication with other disciplines, we design infrastructure that enables efficient exploration of scientific data which leads to unprecedented discoveries. We can help domain scientists to quickly find the effect of underground seismic activity in a city, or quickly determine which are the next possible areas of interest while navigating the neurons of the human brain. By combining deep introspective systems research with reaching-out to demanding applications we aspire to bring the scientific method closer to the fourth paradigm.

Prof. Anastasia Ailamaki gave a talk at the Falling Walls Conference on November 9, 2011.

The Falling Walls conference is an annual global gathering of forward thinking individuals from 75 countries. Each year, 20 of the world’s leading scientists are invited to Berlin to present their current breakthrough research.
The entire session is available online: http://www.livestream.com/fallingwallsconference/video?clipId=pla_080f7aac-e5a5-445f-9b36-658fab5ebd49
Posted by Manos Athanassoulis at 15:46
Wedding!

Dr. Miguel Branco got married in September 2011. Congratulations and all the best wishes for a happy and prosperous life. 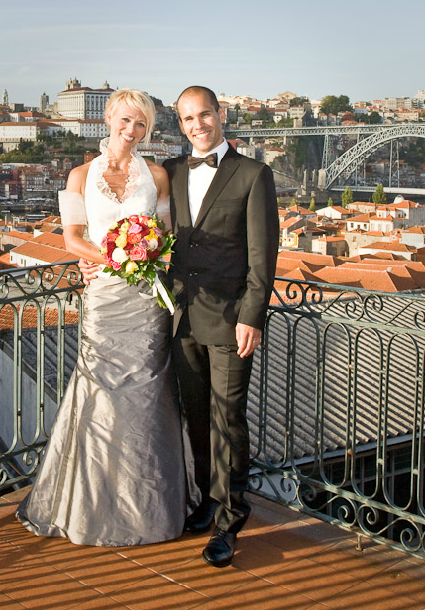 We welcome Sadegh Nobari in our lab! Sadegh joined DIAS in September 2011 for a 6-month internship.

We are happy to announce that our 2011 summer interns Nastaran Nikparto and Chinh Nguyen Quoc have arrived to our lab. They will be with us till September.

Today's scientific processes heavily depend on fast and accurate analysis of experimental data. Scientists are routinely overwhelmed by the effort needed to manage the volumes of data produced either by observing phenomena or by sophisticated simulations. As database systems have proven inefficient, inadequate, or insufficient to meet the needs of scientific applications, the scientific community typically uses special-purpose legacy software. When compared to a general-purpose DBMS, however, application-specific systems require more resources to maintain, and in order to achieve acceptable performance they often sacrifice data independence and hinder the reuse of knowledge. Nowadays, scientific datasets are growing at unprecedented rates, a result of increasing complexity of the simulated models and ever-improving instrument precision; consequently, scientistsqueries become more sophisticated as they try to interpret the data correctly. Datasets and scientific query complexity are likely to continue to grow indefinitely, rendering legacy systems increasingly inadequate. To respond to the challenge, the data management community aspires to solve scientific data management problems by carefully examining the problems of scientific applications and by developing special- or general-purpose scientific data management techniques and systems. This talk discusses the work of teams around the world in an effort to surface the most critical requirements of such an undertaking, and the technological innovations needed to satisfy them.

Posted by Manos Athanassoulis at 13:29
Best Demo at SIGMOD 2011
The demonstration of the DORA system won the Best Demonstration Award at SIGMOD 2011! The team that implemented this impressive demo consisted of Ippokratis Pandis, Pinar Tozun, Miguel Branco, Dimitris Karampinas, Danica Porobic, Ryan Johnson and Natassa Ailamaki. The entire team is affiliated with EPFL. Dimitris Karampinas is a graduate student at the University of Patras, Greece, and he interned at the DIAS lab for 3 months during the summer of 2010.  SIGMOD is the premier conference on data management systems, and this year it was held in Athens, Greece.
A Data-oriented Transaction Execution Engine and Supporting Tools: Conventional OLTP systems assign each transaction to a worker thread and that thread accesses data, depending on what the transaction dictates. This thread-to-transaction work assignment policy leads to unpredictable accesses. The unpredictability forces each thread to enter a large number of critical sections for the completion of even the simplest of the transactions; leading to poor performance and scalability on modern manycore hardware. This demonstration highlights the chaotic access patterns of conventional OLTP designs which are the source of scalability problems. Then, it presents a working prototype of a transaction processing engine that follows a non-conventional architecture, called data-oriented or DORA. DORA is designed around the thread-to-data work assignment policy. It distributes the transaction execution to multiple threads and offers predictable accesses. By design, DORA can decentralize the lock management service, and thereby eliminate the critical sections executed inside the lock manager. We explain the design of the system and show that it more efficiently utilizes the abundant processing power of modern hardware, always contrasting it against the conventional execution. In addition, we present different components of the system, such as a dynamic load balancer. Finally, we present a set of tools that enable the development of applications that use DORA. 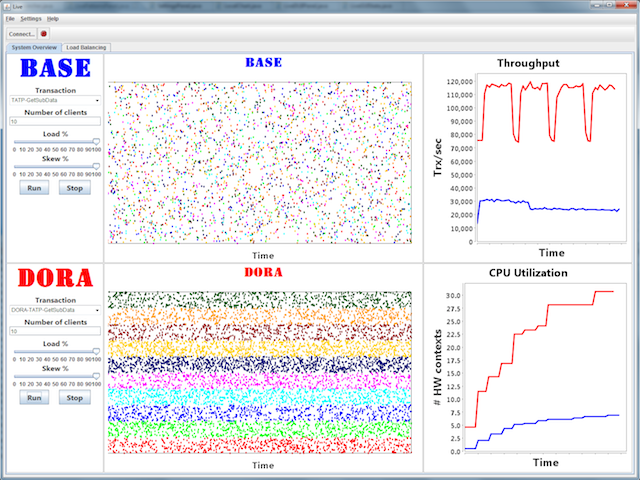 We are happy to announce that "PLP: Page Latch-free Shared-everything OLTP" is accepted for presentation at VLDB.

PLP: Page Latch-free Shared-everything OLTP. Scaling the performance of shared-everything transaction processing systems to highly-parallel multicore hardware remains a challenge for database system designers. Developments in OLTP technology prevent locking and logging from being scalability bottlenecks on such systems, leaving page latching as the next potential problem. To tackle the page latching problem, we design a system around physiological partitioning (PLP). The PLP design applies logical-only partitioning, maintaining the desired properties of shared-everything designs, and introduces a multi-rooted B+Tree index structure (MRBTree) which enables the partitioning of the accesses at the physical page level. That is, logical partitioning, along with MRBTrees ensure that all accesses to a given index page come from a single thread and, hence, can be entirely latch-free. We extend the design to make heap page accesses thread-private as well. The elimination of page latching allows us to simplify key code paths in the system such as B+Tree operations leading to more efficient yet easier maintainable code. Profiling a prototype PLP system shows that it acquires 85% and 68% fewer contentious critical sections per transaction than an optimized conventional design and one based on logical-only partitioning respectively. As a result the PLP prototype improves performance by up to 40% and 18% over the two systems on two multicore machines.

Posted by Manos Athanassoulis at 0:02
Congratulations to Dr. Pandis!!

Ippokratis defended successfully his thesis on May 12th, 2011 on Scalable Transaction Processing Through Data-Oriented Execution. 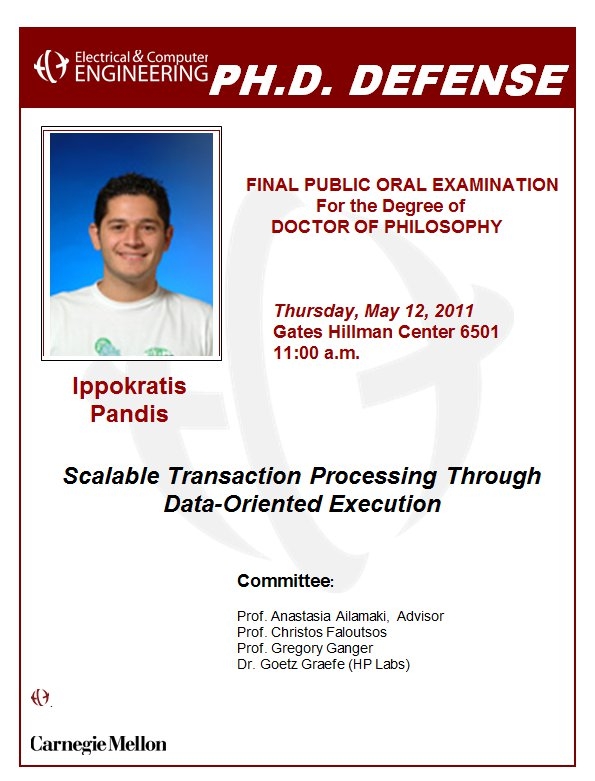 Posted by Manos Athanassoulis at 16:19
IC has strong presence in SIGMOD 2011

Members of the DIAS and DATA laboratories will have a total of seven papers (4 research and 3 demonstration papers) at this year's SIGMOD Conference, to take place June 12-16 in Athens, Greece. SIGMOD is the premier annual research conference in data management. At the conference, Prof. Anastasia Ailamaki (director of the DIAS lab) will deliver a keynote speech titled "Managing Scientific Data", while Prof. Christoph Koch (director of the DATA lab) will accept the SIGMOD 2011 Best Paper Award for his paper "Entangled queries: enabling declarative data-driven coordination", jointly authored with his Cornell colleagues Lucja Kot, Nitin Gupta, Sudip Roy, Gabriel Bender and Johannes Gehrke. Finally, one of the demonstations ("A Data-oriented Transaction Execution Engine and Supporting Tools") was awarded the best demo award! Overall, an impressive EPFL IC presence at the creme-de-la-creme of data management research forums!