On April 30, 2011 we made public the current experimental version of Shore-MT storage manager and Shore-Kits (a benchmark suite that runs on top of Shore-MT).

Navigate to this page for more details. Instructions are available here.

As the number of compute elements per chip increases exponentially, embarrassingly parallel hardware calls for embarrassingly scalable database applications on chip multiprocessors. Despite that database systems have long optimized for parallel execution, however, known methods are of bounded utility in harvesting scalable performance from the available raw parallelism. Common sense is often contradicted; for instance, increasing on-chip cache size or aggressively sharing data among processors is often detrimental to performance. As the number of hardware contexts grows, favoring scalability over single-thread performance leads to higher overall gains.

This talk presents lessons learned when trying to scale database workloads on chip multiprocessors. When transforming a database storage manager from a single-threaded Atlas into a multi-threaded Lernaean Hydra which scales to infinity, major rethinking of basic constructs at all system levels is in order. At the system level, choosing a mechanism to access critical sections becomes crucial: spinning wastes cycles, while blocking incurs high overhead. When processing transactions, concurrency needs to be converted into parallelism – a challenging task, even for transactional workloads that are inherently concurrent. Often, parallelism needs to be extracted from seemingly serial operations; extensive research in distributed systems proves to be very useful in this context. When processing queries, service-oriented architectures provide an excellent framework to exploit available parallelism. The tradeoffs and trends in the above research directions will be discussed using examples from the StagedDB/CMP and ShoreMT projects at EPFL. 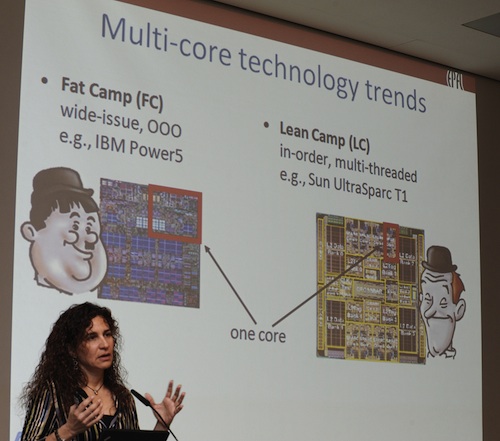 We are happy to announce that:

are accepted for presentation in SIGMOD 2011, Athens, Greece.

MaSM: Efficient Online Updates in Data Warehouses. Data Warehouses (DW) have been traditionally optimized for readonly query performance, allowing only offline updates at night, essentially trading off data freshness for performance. The need for 24x7 operations in global markets and the rise of online and other quickly-reacting businesses make concurrent online updates increasingly desirable. Unfortunately, state-of-the-art approaches fall short of supporting fast analysis queries over fresh data. The conventional approach of performing updates in place can dramatically slow down query performance, while prior proposals using differential updates either require large in-memory buffers or may incur significant update migration cost. This paper presents a novel approach for supporting online updates in DW that overcomes the limitations of prior approaches, by making judicious use of available SSDs to cache incoming updates. We model the problem of query processing with differential updates as a type of outer join between (a) the data residing on disks and (b) the updates residing on SSDs, and present MaSM algorithms that achieve small memory footprints, low query overhead, low SSD writes, efficient in-place migration of updates, and correct ACID support. Our experiments show that MaSM incurs only up to 7% overhead both on synthetic range scans varying range size from 100GB to 4KB and in a TPC-H query replay study, while also increasing the update throughput by orders of magnitude.

Predicting Cost Amortization for Query Services. Emerging providers of online services offer access to data collections. Query service providers need to build data structures, such as materialized views and indexes, in order to offer better performance for user query execution. The cost of such structures is charged to the user as part of the overall query service cost. In order to ensure the economic viability of the provider, the building and maintenance cost of new structures has to be amortized to a set of prospective query services that will use them. This work proposes a novel stochastic model that predicts the extent of cost amortization in time and number of services. The model is completed with a novel method that regresses query traffic statistics and provides input to the prediction model. In order to demonstrate the effectiveness of the prediction model, we study its application on an extension of an existing economy model for the management of a cloud DBMS. A thorough experimental study shows that the prediction model ensures the economic viability of the cloud DBMS while enabling the offer of fast and cheap query services.

A Data-oriented Transaction Execution Engine and Supporting Tools. This demonstration highlights the chaotic access patterns of conventional OLTP designs which are the source of scalability problems. Then, it presents a working prototype of a transaction processing engine that follows a non-conventional architecture, called data-oriented or DORA. DORA is designed around the thread-to-data work assignment policy.

Posted by Manos Athanassoulis at 21:05
Prof. Moshovos is visiting DIAS

We are happy to announce that Prof. Andreas Moshovos just arrived at our lab to spend two semesters with DIAS as a visiting professor. Prof. Moshovos (http://www.eecg.toronto.edu/~moshovos/) is an associate professor at the Computer Engineering Group, University of Toronto.

His research currently focuses on two important design challenges: (i) the ever-growing gap between processor and memory performance, and (ii) the increasing complexity and reduced reliability of existing performance enhancing techniques coupled with the prohibitive levels of power dissipation. In addition, our research also considers how the enhanced semiconductor technologies can be used to enhance functionality. Our research focuses primarily in developing techniques for addressing perceived, long-term design challenges. A common theme amongst the techniques that we develop is that they are behavior-centric (i.e., they exploit aspects of the behavior of "typical" applications), programmer transparent (they required no changes to existing software) and often layered extensions (i.e., they can be incorporated into existing designs with minimal changes).

DIAS along with LANOS went to our annual ski-weekend in the cold mountains of Valais!

A new public version for Shore-MT was released (see: http://diaswww.epfl.ch/shore-mt/). Soon a public version of shore-kits, a tool to run DB benchmarks (TPCC, TPCE, TM-1, TPCH), will be released.

Posted by Manos Athanassoulis at 17:55
Congratulations to Dr. Dash and Dr. Johnson

Debabrata Dash and Ryan Johnson defended their PhD theses back at CMU sucesfully.

TPC-E vs. TPC-C: Characterizing the New TPC-E Benchmark via an I/O Comparison Study to appear in SIGMOD Record, Vole. 39(4), 2010.

Here are my Data Files. Here are my Queries. Where are my Results? is accepted for presentation at CIDR 2011.

Posted by Manos Athanassoulis at 17:51
Ryan moved to Toronto as an assistant professor.

Ryan moved to Toronto as an assistant professor.