The show must go on!
(category : Work)
After two weeks of intense training of Ngoc, Hieu and Dung the last day of Luis and me has finally arrived. As if on divine intervention our last day of work in the street was February 3, which corresponds exactly to the name of the street we have put the truck (3 thang 2). Dung has decided to try and continue measuring for some time. We are keeping our fingers crossed that everything will go well the next week... 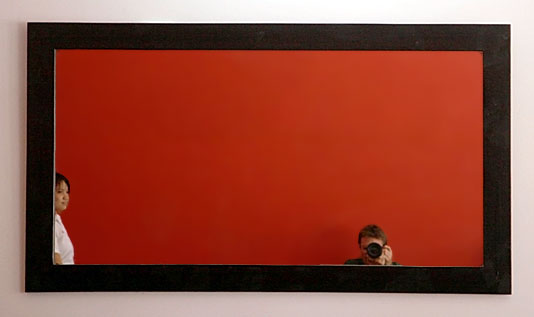 Posted by Oliver Fuhrer at 20:25
In the street...
(category : Work)
Finally, since 9 January, we're in the street and measuring. Daily routine is checking on the propane liberation system, checking all the instruments in the truck, checking on the webcam and burning the videos onto DVDs, ... etc... the list of daily chores is long and we try to share as much as possible. Here some fast facts...
- Tracer liberation from 10am to 10pm, since the heavy traffic is forbidden up to 8pm
- Tracer concentrations at the other side of the street vary from 0ppb to 200ppb with a propane liberation of 5l/min over 100m of tube. Interestingly, there is a daily reoccuring pattern of low concentrations in the morning and high concentrations in the afternoon into the evening, which is probably due to changing wind direction and ventilation of the street canyon.
- MFC for propane is behaving well. Irregular occuring problems are probably linked to impurities in the tubes and the propane and - up to now - could be remedied by completely opening and closing the MFC several times.
- The BTEX is in the truck and running. We're now looking into a calibration and are currentlyh organising all of the connection necessary for the calibration gas.
- The industrial PC which serves as a data logger could not be fixed. After changing RAM, Harddisk, reinstalling the operating system, and checking the mainboard, I've abandoned to fix it. The computer does not record any data always starting a midnight and probably this is due to a software error.
- The tube is slowly falling apart. Since many motorcycles drive over it and taxis sometimes even park on it, the plastic is slowly giving away. After having supported it with wood on one side, we are now trying to put wood on the other side and fixing it directly to the pavement with screws.
- The LPG sensor which measure the concentrations of LPG inside the tube and switched of the MFC if 50% LEL is exceeded, is not working correctly. A comparison with the second LPG sensor, showed more than a factor 3 difference. We are currently trying to calibrate it with a mix of propane to see where the truth lies. Probably the sensor is not very well adapted to the high humidities in Vietnam.
- After some organizational and personal problems with the helpers we've been allocated by IER, everything is now fine and we have got more or less four half-time working people to help us in the street.
Posted by Oliver Fuhrer at 15:58
Campaign news...
(category : Work)
Some updates concerning the campaign...

- Finally, we have received the ok that the BTEX is with the transport company in France and will leave for HCMC within the next couple of days. The last piece of equipment finally starting its journey to Vietnam. Cross your fingers that it will get through customs without problems!

- We have measured the LPG gas sold here in Vietnam with the calibrated GC in order to quantify the contents of other VOC which might contaminate our measurements. The main components of LPG are propane, iso-butane, n-butane. Another substance which cannot be identified is present in non-neglectable quantity, probably a butylene or propylene. Other substances are well below 3 ppb in a propane concentration level of 800 ppb, thus less than 1%. Thus, we can probably use LPG for our tracer experiments.

- The instruments in the truck (CO, SO2, NO/NOx, O3, PM2.5) are in a deplorable condition. Pumps are all strongly corroded and have not been serviced for decades, CO does not stabilize and values vary incredibly, O3 lamp has to be replaced, SO2 is fine after major overhaul, NO/NOx is probably ok after pump revision. The calibration unit was broken (and nevertheless used for calibration by Victory Co.) and is now working fine again. The O3 generator inside remains to be tested with a calibrated NO/NOx unit or the O3 unit. The pressure fluctutations at the exit of the zero air generator is not buffered with an expansion volume and thus the MFCs cannot compensate for the rapid pressure fluctuations. The industrial PC in the truck which is supposed to record the data, crashed every 5 mins and reboots. In brief, many things still remain to be done.

- Tomorrow we'll move the truck to the street and start measuring background of propane/butane with the GC. The goal is to start liberating tracer on next weekend. Instruments for classical pollutants will remain broken or uncalibrated for the moment. A technician of Victory Co. will probably fly in from Hanoi within the next couple of days to have a look.

- And then some pictures to make this blog entry more colorful...
Upper left: Getting the MGC101 power supply +/-15V channel repaired.
Upper right: Strange mesurement wheel of the CO11M where half is missing.
Bottom: Excursion 10km outside of HCMC to use calibration gas. 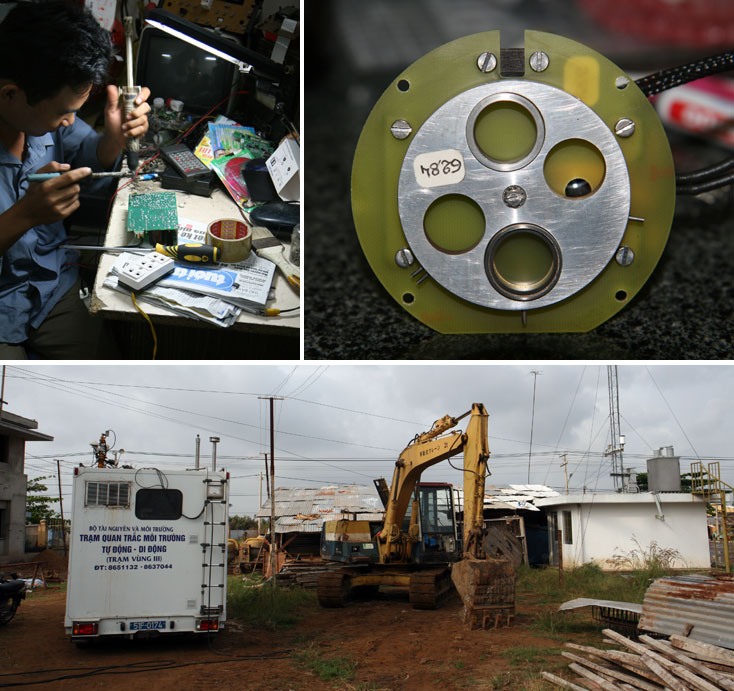 Posted by Oliver Fuhrer at 16:31
Back on track!
(category : Work)
After a short intermezzo we're back on track and working hard towards finally putting the measurement truck inside the street...
- Site selected (see image)
- Electricity contracted on both sides of street
- Permissions for tracer emission, truck placement and tube placement are ok
- Security guard contracted
- Tracer liberation system being built with blower in middle of tube
- GC currently being calibration using new calibration gas
- Camera in street and working, up to 30 minutes electricity gaps are bridged by UPS
- Weather station on high-rise building close to site and logging
- Equipment in truck undergoing inspection (calibration gas still missing)
- Planned to move to street next week 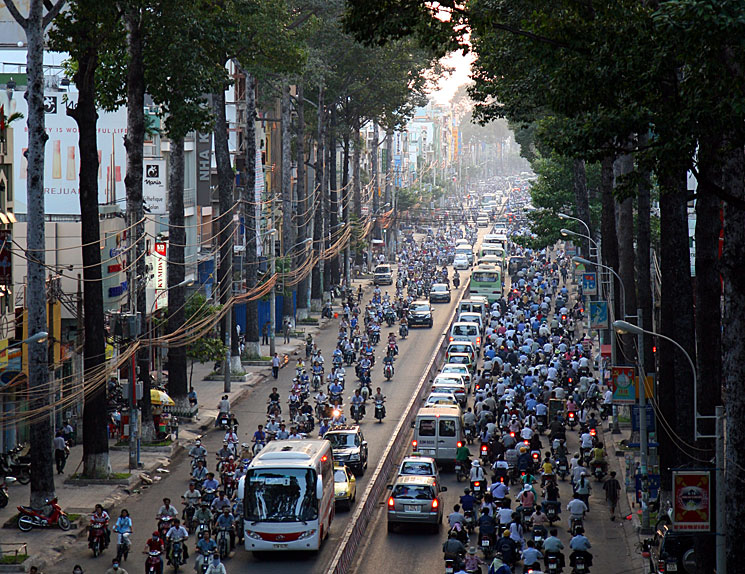 Posted by Oliver Fuhrer at 17:28
Comments (1)
Work in progress...
(category : Work)
To all people who think that Luis and me are on a vacation: Don't read any further!

Next steps:
- construct tracer liberation system after some initial tests with new blower
- start up GC and calibrate
- get revision of NOx, O3, SO2, CO, and PM10/2.5 done from Victory
- install weather station on rooftop of closeby building
- put camera to street and shoot some sample videos to send to EPFL
- offer a stick of incense and some fruit to Wishnu, Budda and Jesus in order to pray for good luck for the campaign
Posted by Oliver Fuhrer at 16:31
Calibration Gas in HCMC!
(category : Work)
The calibration gas mixture which has been sent by ship from Singapore has arrived today in HCMC, meaning that we can already measure the volatile organic compounds as well as the tracer! Now we are crossing the fingers for the NOx/SO2/CO calibration gas and the BTEX to arrive on time...

Our flight is booked. This is your caption speaking... ready for takeoff on November 29, 2006 at ZRH. There's no way back now... Roger, over, ...chrrrck!
Posted by Oliver Fuhrer at 10:24
Equipment arrived!
(category : Work)
Finally, the box containing the gaschromatograph has arrived at the Institute of Environment and Resources in HCMC. To our surprise, this time it only took 5 days and not 2 months.
Posted by Oliver Fuhrer at 8:51