iPhone SMS bug
(category : Misc)
It's been almost a week now that I'm proudly using my unlocked iPhone, and I really love it! I quickly discovered a very annoying bug in the SMS application, however. A lot of SMS messages originating from the Internet do not bear a real phone number with digits as Sender number, but an arbitrary alphanumeric string. Those SMS with a string as sender are not displayed on the iPhone! Tested with latest firmware 1.0.2.

They are received by the phone and acknowledged to the carrier, but the iPhone software is not able to decode them and simply ignores them. Technically - and that's highly geeky stuff! - those are SMS where the PDU string has a Type-of-address octet for the Sender number set to 0xD0, for "Alphanumeric" encoded in GSM TS 03.38 7-bit default alphabet.

I discovered this issue after performing a refill of my prepaid SIM card. I usually receive a SMS confirming the amount added to my account, but did not this time. After sending myself several SMS from the Internet with an alphanumeric sender, and seeing all those with status Received on the sending log, the bug is obvious. I googled to check if other iPhone users have the same issue, and found topics on the bladox.com and hackint0sh.org forums. Apple, please fix this!

Posted by François Bonzon at 17:51
Comments (1)
My iPhone unlocked!
(category : News)
I was waiting for two months for this moment, and it happened two days ago: a software solution to unlock the iPhone is now available! Yeah! Moreover, it's free! The entire procedure is easy and no longer than 15 minutes to complete, thanks to the anySIM GUI application from the iPhone Dev Team.

My iPhone can now be used with any GSM carrier, and not only with AT&T in the USA like Apple intended. I am able to receive calls and SMS on my iPhone with my pretty own M-Budget Mobile SIM card, on the Swisscom network.

You have an iPhone? Or you don't? Or even maybe you plan to get one later? Anyways, if you are reading this, leave a comment! Because I suspect only Isatis and myself known about this blog so far... 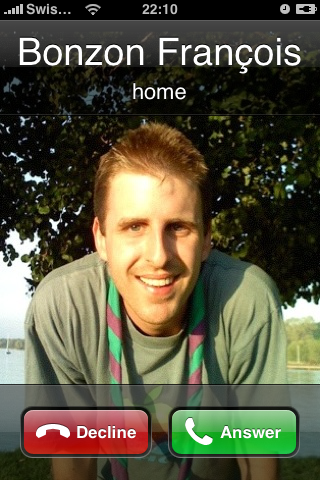