Singly quantized vortices have already been observed in many systems, including the superfluid helium, Bose-Einstein condensates of dilute atomic gases, and condensates of exciton-polaritons in the solid state. Two-dimensional superfluids carrying spin are expected to demonstrate a different type of elementary excitations referred to as half-quantum vortices, characterized by a

rotation of the phase and a

Posted by Roland Cerna at 14:52
Time Resolved Cathodoluminescence
We have correlated time resolved CL and AFM images on InGaN quantum wells. This has allowed us to provide a possible explanation for the very high luminescence efficiency of such quantum wells, despite the presence of a large density of dislocations. 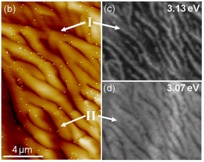