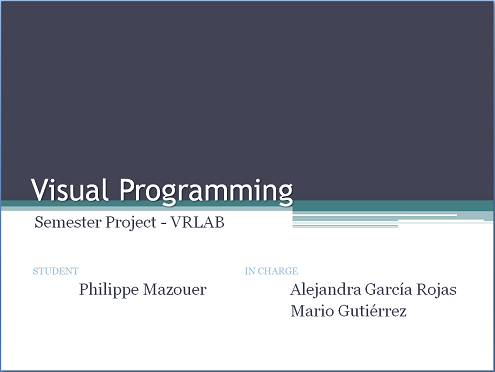 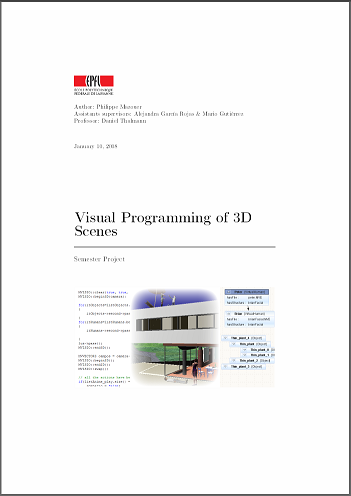 Posted by Philippe Mazouer at 16:22
Visual Programming - RC1
(category : Projet de semestre)
- Fixed a crash that occurred during loading of big scenes
- Changed the "look at" function when a human is looking at another human (changed height, so that they are not looking at each other feet)
- In Java, went from ArrayList to Hashmap in order to avoid multiple "for"
- Scrollbars at the bottom left are replaced by "textbars" ...home made unlimited scrollbars :)
- Code a bit cleaner/more commented 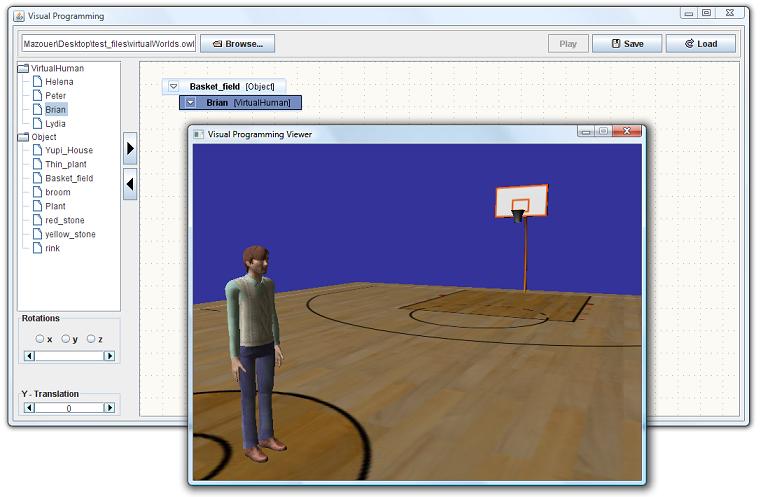 Please find attached the report with my comments (I used the commenting tools of acrobat) Let me know if you dont have problems reading it.

Take care.
Alejandra.
Posted by Alejandra Garcia Rojas Martinez at 12:32
Test Files
(category : Projet de semestre)
- Final version with all the problems fixed (animation files, etc.)
Posted by Philippe Mazouer at 11:00
Java Libraries
(category : Projet de semestre)
Here's the "Visual Libraries"
Posted by Philippe Mazouer at 15:40
Almost done!
(category : Projet de semestre)
Hello Philippe,
I have seen tha application, it is nice how works the HSALook.
Also I tested the Save and Load, I fond that when you load a previous scene, and happens that a character had some animations (i) te play button is not active and you another animatnion so the play is active (ii) it does not execute the animation it had loaded. May be you are not creating or adding the animations at the moment of loading a scene.

The rest I find it well, bue I wanted to debug, and I couldnt because I dont have the jar files for org.netbeans.api.visual.

The animations you were missing are here. And it seems that the repport has to be delivered before 21 december, and the presentation will be during the first 3 weeks of january. Any way they will send an email this week with the oficial dates.

I have ready this new material:
1. Three new objects: a house and two plants
2. The ontology with the definition of this objects
3. An example in C++ of the Look Action

The Look example is also a Player of animations, it reads a list of animations from a txt file and if you click in the button ">>" it loads the next animation. YOu mey have to modify the txt file called "config.txt" to put the animations you have.