Resistance is futile! Become part of the Borg collective

Privacy is one of those things intimately linked to individualism, and one of the fundamental needs of any human being. Obviously, the definition of privacy and its degree, or even its importance, largely depends on ones personality, age, and culture, among others. Recently, with the proliferation of video surveillance systems across cities, issues such solutions created for the privacy of individuals have been raised, and are among hot topics in discussions and debates around video surveillance. Other new information and communication technologies are also bringing their share of invasion of privacy. Recently, The Swiss Federal Commissioner for Data Protection announced they are taking Google to court because of the invasion of privacy that Street View represents. Likewise, serious privacy issues have been identified in Facebook, Youtube, Flicker, and many other social networking services. In fact, it seems that some of today’s services and products, and many more in future, in order to be good and efficient, will need to invade our privacy! Or this is at least what some pretend. Because of the undeniable added value of many of such products and services, some advocate that we should revisit our perception about privacy and live with the fact that it will be increasingly difficult to maintain privacy as we used to. In other words, we will have to trade our privacy for more features and functionalities, and often, we won’t be given even the choice. Interestingly, a non-negligible portion of scientific community and opinion leaders seem to agree! Well...I don’t. After scarifying QUALITY to get cheap goods, here comes loosing our PRIVACY to get goods. Living in a country which is build around the concepts of quality and privacy, I beg to differ! First of all, technology can be used to reduce, if not to eliminate the dilemma of making a choice between privacy and additional features. It is possible to have the best of the both, if an effort is made to do it. Second, and more importantly, this road will take us to a society where individuals will increasingly disappear in the collective. Trading privacy for services will lead into sharing all thoughts, and inevitably, some other individual values such as ownership. Do you know what a society deprived of privacy, ownership and other individual values is called: THE BORG COLLECTIVE!
Are you ready for assimilation?

This is a mirrored version of my new blog on http://www.ebrahimi.ch 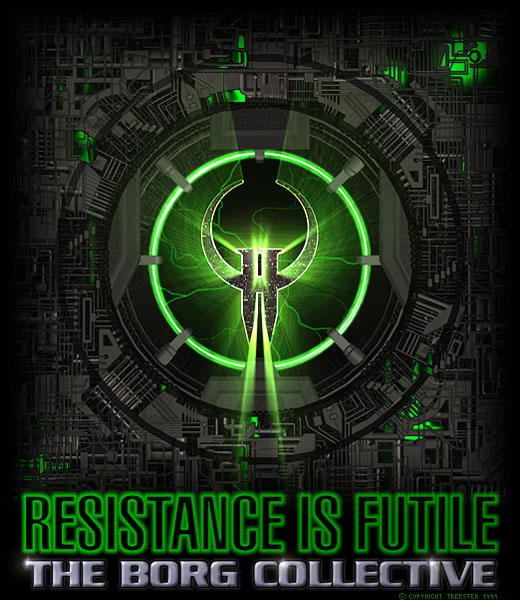