The Eighth lunch meeting in 2008, and the first after the summer break, took place on 22nd September 2008. This lunch was organized by Daniele Ticca one week before he ends his stay with us. Unsurprizingly, on he menu, we had Pizza! We wish Daniele good luck in his future career and will always remember his stay and the good memories he left with us.

Some photos of the lunch are available at: 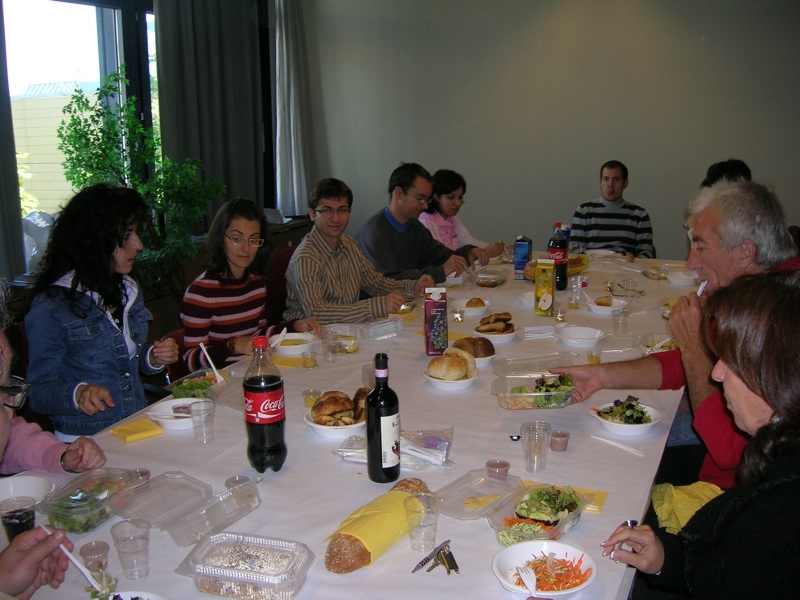 Posted by Touradj Ebrahimi at 20:54
K-Space meeting in Lausanne

K-space is an EC funded Network of Excellence on Knowledge Space of Semantic Inference for Automatic Annotation and Retrieval of Multimedia Content. This consortium has been running since January 2006 and is currently in its third and last year of conducting business. More information about K-space can be found at the following website: http://www.k-space.eu/

On September 22 and 23, 2008, the General Meeting of K-space was organized by my research team at EPFL, where more than 40 attended. A few pictures of the event can be found at the following site: 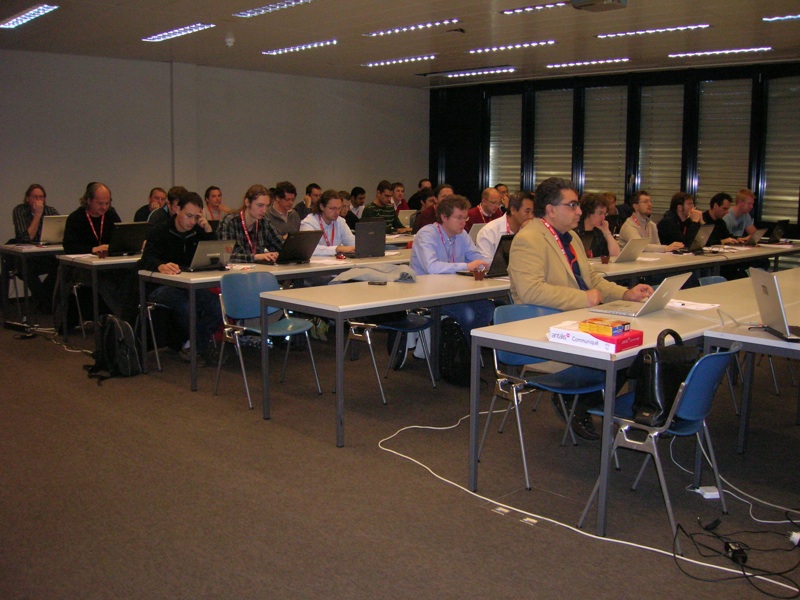 Posted by Touradj Ebrahimi at 10:03
Petamedia SIG1 meeting at EPFL

Petamedia Special Interest Group 1 (SIG1) on content distribution took place at EPFL on Friday September 19th, 2008. Petamedia is a network of excellence funded by the European Commission on Peer to Peer Tagged Media. I have already written other articles about this NoE on this blog, and refer interested readers to those articles. Let me just say that more information about this NoE can be found at the following url:

The main objective of SIG1 was to have an indepth understanding of acticvities of all groups involved in content distribution related topics, and to define a detailed program to collaborate with each other.

I believe this goal was achieved with success and a mini-project was defined between most of the partners present to work together on the problem of video streaming over a peer to peer network. Other achievements of the meeting were organization of a tutorial for all partners to better understand issues and trends in peer to peer networks, and to define a longer term road map to explore avenues beyond the mini-project that has been set up.

A few pictures of the meeting are available at: 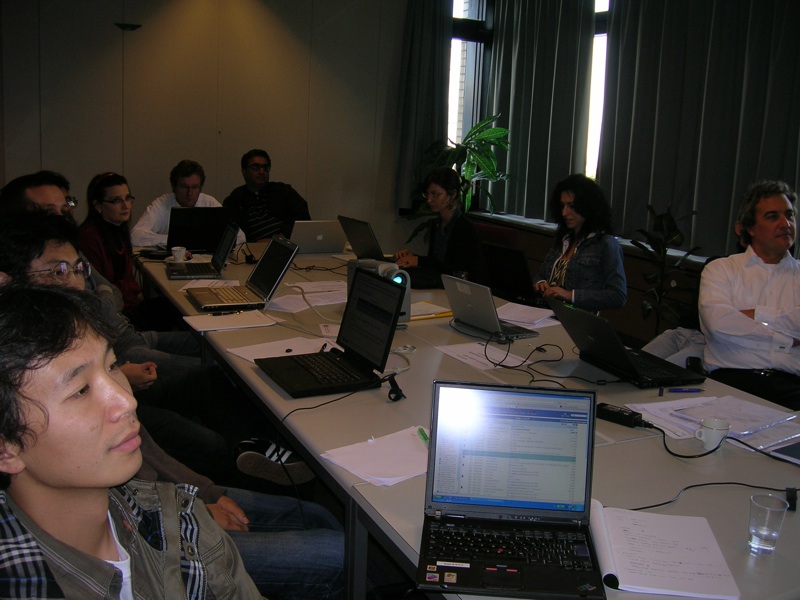 IM2 and Affective Sciences Summer Institute took place in Riederalp from 1-3 September 2008. IM2 is a Swiss National Center of Competence on Research in the field of Interactive Multimodal Information Management. I have been the deputy director of IM2 since 2006. Affective Sciences is another Swiss National Center of Competence on Reseach interested in understanding how emotions affect the way individuals and societies behave. Riederalp is a village in Valais Canton of Switzerland not very far from the world famous Aletsch glacier. This summer institute was organized to explore common interests between these two NCCRs and to set the ground for stronger collaborations between groups and individuals involved in each. To do so, after a short presentation of each NCCR, a GEKO (Get to Know each Other) session was organized followed by parallel sessions with presentations and workshops around themes of common interest. Finally a poster session was an opportunity for many of the researchers to present their research activities in more details. I acted at the moderator of the GEKO, and three of my research team members attended this summer institute (Francesca de Simone, Jong-Seok Lee, and Ashkan Yazdani). The program of the summer institute, and the slides of the presentations are accessible from the following url:

In the above site you will also find a lot of pictures. But I also took some of mine, that can be seen at the following link: 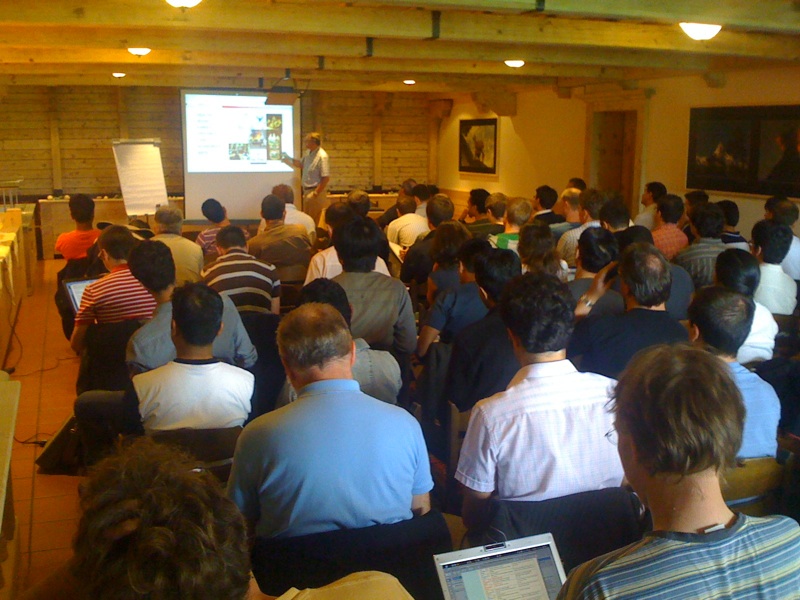 Posted by Touradj Ebrahimi at 9:48
SPIE Optics and Photonics 2008

The annual SPIE meeting Optics and Photonics took place from 10-14 August 2008 in San Diego. Optics and Photonics is a huge symposium composed of several conferences. The conference Appications of Digital Image Processing is one of the oldest (if not the oldest) conferences in image processing. It has been founded and is chaired by Andy Tescher a well-known researcher in the field. This year, Andy asked me to be the acting chair of the conference due to some other committments he had. The conference was very intresting with a lot of first time presentations in some of the most recent advances in image processing. Among others I would like to mention JPEG-XR which is a new standard for image compression. I took a few pictures during the conference that can be consulted from the following url:

The link to Optics and Photonics 2008 program is somehow unavailable at the time of the writing of this article. But the best way to find out about the program would be to go to SPIE website at http://www.spie.org and then look for past conferences. I may update this article with the exact url, if SPIE updates its website at some point in future. 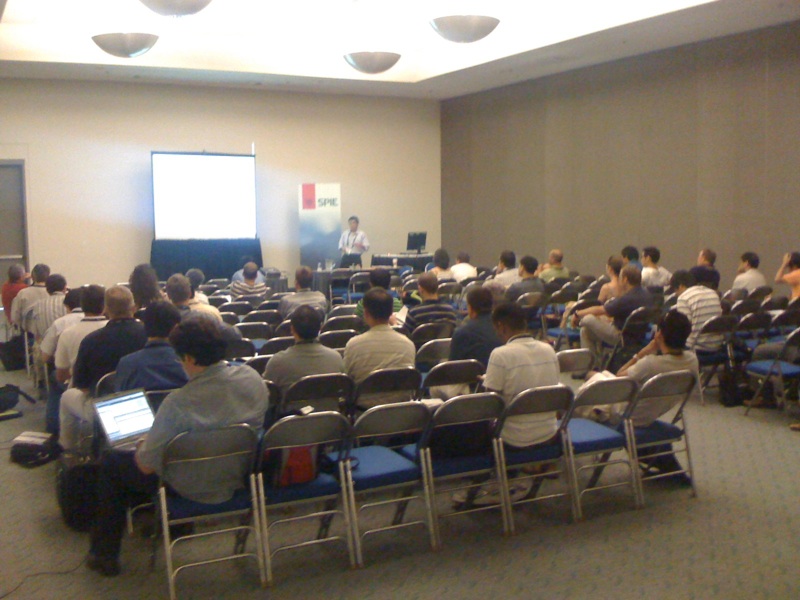 Posted by Touradj Ebrahimi at 18:58
MPEG meeting in Hannover, Germany

The 85th MPEG meeting took place in Hannover between 21st and 25th July 2008. This meeting was colocated with the Joint Video Team (JVT) which is a group composed of experts from both ISO/IEC and ITU-T, active in standardization of Advanced Video Coding (AVC) also known as MPEG-4 Part 10 and H.264. Many developments took place during that week. A highlight of the meeting can be accessed at the end of this blog. Beside progress in Multiview Video Coding (MVC), a well attended meeting discussed requirements, applications and needs for standardization of potential future video compression standards. The MPEG meeting was followed by an SC29 meeting in Hannover. SC29 is the board overseeing the activities of both JPEG and MPEG standards.

I took a few pictures of both events that can be consulted at the following url: 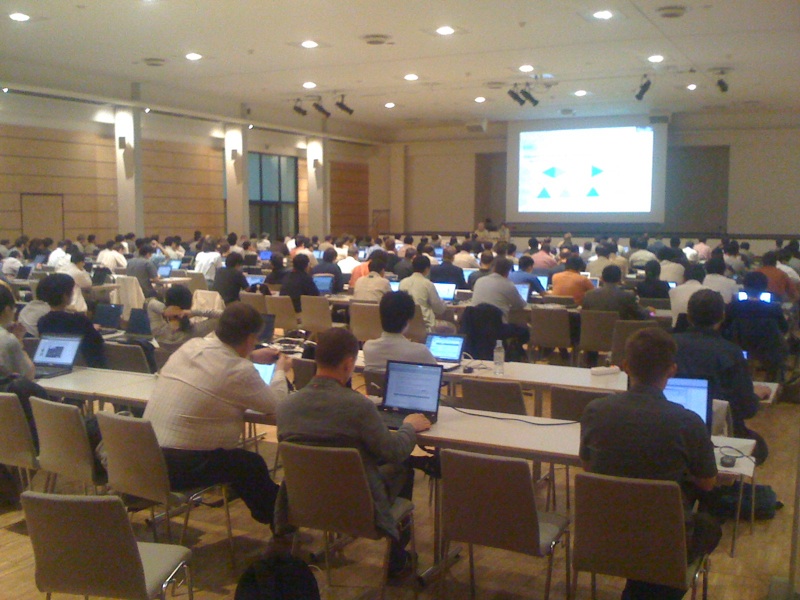 Posted by Touradj Ebrahimi at 0:09
JPEG meeting in Poitiers, France

JPEG committee met in Poitiers, France, from July 7th to 11th 2008. This was the second time in the same year some of the JPEG committee members were coming to this city. In fact, a meeting of the Ad Hoc Group on JPEG XR evaluation also took place there a few months earlier, about which I already reported in my blog. This meeting was an occasion to progress with quite a few items. JPEG XR reached Final Committee Draft  status and has been sent out for ballot by ISO National Bodies. JPEG XR is also going to extend its scope with new parts to take into account things such as moving pictures. Another important issue was the creation of a new work item for standardization called Advanced Image Coding (AIC). AIC has been an exploratory activity in the last few years within JPEG committee and it was felt that it was now time to officially start work on it towards standardization. The first milestone in AIC will be a set of metrics for both subjective and objective evaluation methodologies and metrics for still image compression. This will then follow by standardization of new algorithms for image compression beyond those already developped or under development in JPEG. JPSearch also progressed well in Poitiers. JPSearch is a standard for annotation, management, search and retrieval of still images. The press release of the JPEG committee which was issued as the outcome of the Poitiers meeting can be accessed below.

I also took a few pictures accessible from: 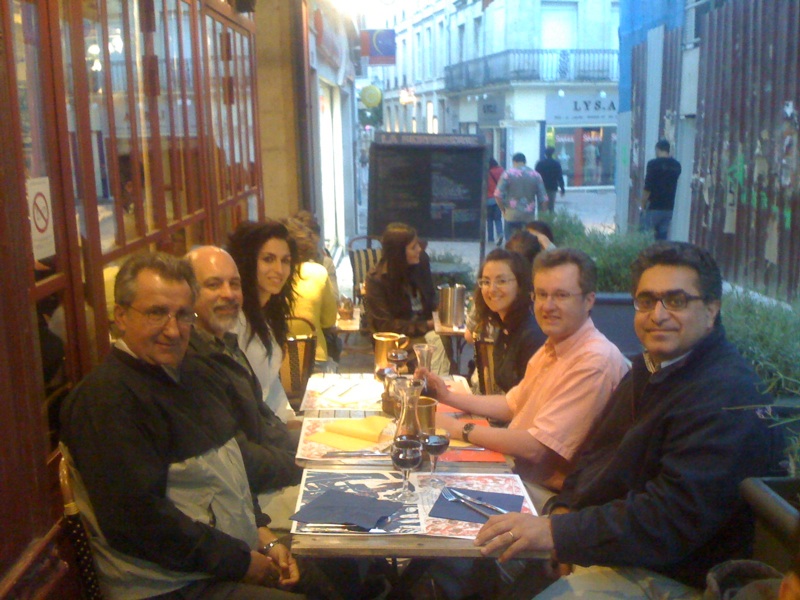 This year saw another very successful edition of the world famous Montreux Jazz Festival. The 42nd festival took place between 4th and 19th July 2008, and lined up a unique collection of artists. Since more than one year, I have been closely involved in an exciting project at EPFL which aims at archiving the recordings of the Montreux Jazz Festivals and to enrich and enhance them to the fullest extent. I will certainly write another article in this blog descrbing more in details the aims of that project. But here, let me just refer you to the url of the Montreux Jazz Festival at:

I attended a few days and nights of the festival with some of my colleagues, combining work with fun. Some pictures can be consulted at the following url: 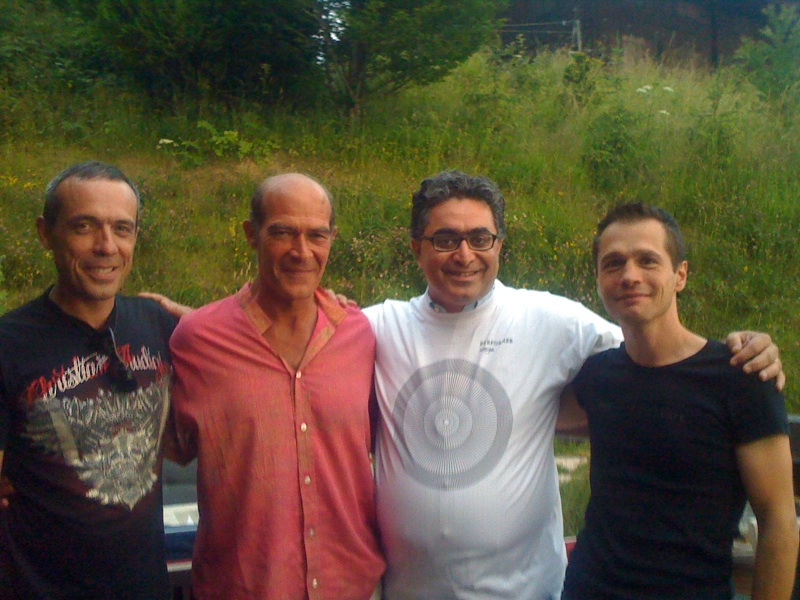 Posted by Touradj Ebrahimi at 7:51
COST 292 WG7 Technical Meeting in Florence
I have already written about COST 292 in this blog. I refer you to past articles for more information about COST 292 or directly to the website of this Action at:
http://www.cost292.org
The Technical Committee WG7 of COST 292 met in Florence on June 30th 2008. This was the forth time we were meeting in Florence at the kind invitation of Fratelli Alinari. Some pictures of the meeting can be consulted at the following url:
http://picasaweb.google.com/Touradj.Ebrahimi/COST292WG7TechnicalMeetingInFlorence 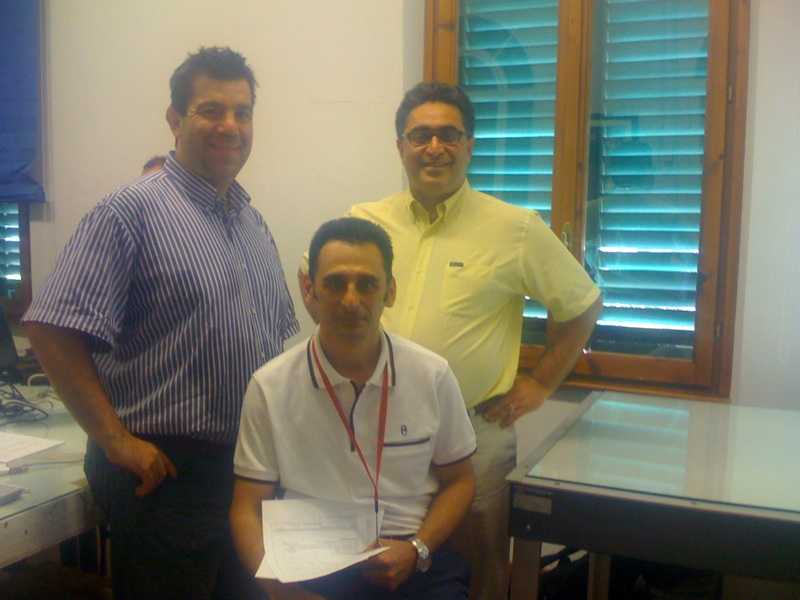 Posted by Touradj Ebrahimi at 15:13
Seventh MMSPL Lunch Meeting
On July 14th 2008, our team had its seventh lunch meeting. This one the last lunch meeting before the summer break. On menu was a collection of Hungarian food thanks to Peter Vajda who is pursuing a PhD in our group.
Some pictures of the lunch are available at the following url:
http://picasaweb.google.com/Touradj.Ebrahimi/SeventhMMSPLLunchMeeting 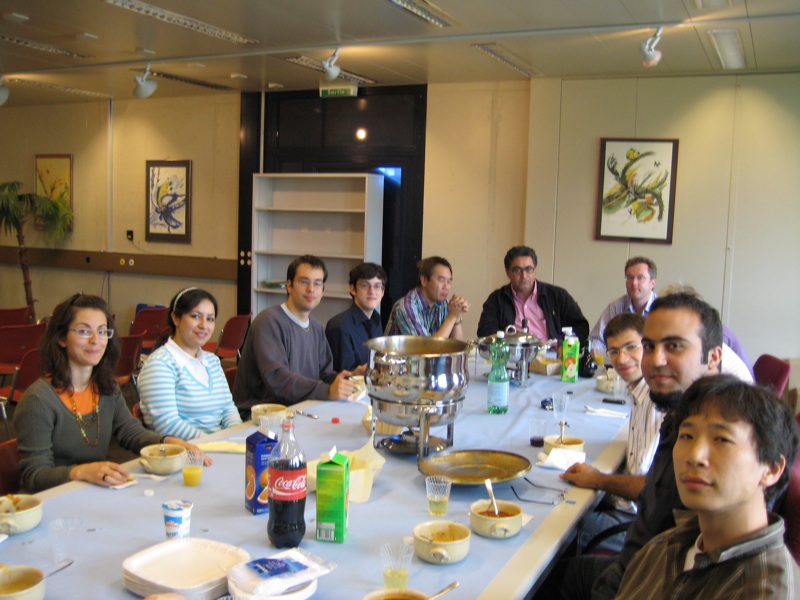