ICME 2008 in Hannover Germany
The 2008 edition of the IEEE International Conference on Multimedia & Expo took place in Germany, in the city of Hannover, from June 22nd to 26th 2008. The conference's general chair was Prof. Joern Ostermann from Leibniz Universität Hannover. I had the pleasure acting as Vice-chair. The conference was very rich in original and high quality papers, presentations and expositions. To save time typing this article, I would like to simply refer the readers to ICME 2008 website and encourage all to consult the program of this conference:
http://www.icme2008.org
ICME 2008 also featured a few very exciting keynote presentations, among which I would like to mention one in particular from Sebastian Thrun of Stanford University on cars that drive themselves. His keynote was definitely very impressive and quite different from the usual keynotes one sees in conferences in the field of multimedia.
In addition to technical sessions, several social events were also organized. The welcome event was featuring a very interesting local drink that had to be taken from two glasses at the same time, and the social dinner happened during the football match opposing Germany and Turkey for the Euro 2008. I let you imagine the ambience when Germans won in a very exciting and dynamic match with several surprises.
I have put some pictures of the conference in the following url:
http://picasaweb.google.com/Touradj.Ebrahimi/ICME2008 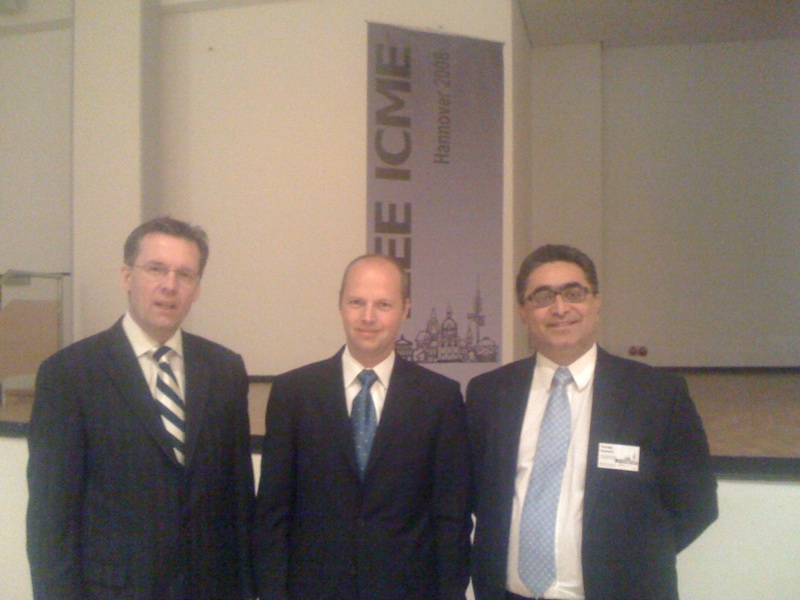 Posted by Touradj Ebrahimi at 15:36
MMSPL open doors day for EPFL financial service
EPFL is recognized as one of the top universities in Europe with unique research and educational programs. We have been often mentioned on the top world and European university rankings, which makes us very proud. But one of the best kept secrets in EPFL is that all these are possible also thanks to hard work and professionalism of our administration which thanks to help and support they provide, they allow us to concentrate most of our energy on the core businesses of our university, namely, education, research and innovation. Among them, for sure, one must mention our financial service. I think we do not thank them often enough for the important role they play in our successes. To show EPFL financial service colleagues our appreciation and to express to them our sincere gratitude, we organized an open doors day on Friday 13 June 2008. This was an occasion for us to not only show them some of our work, but also to have some face to face interactions with them, and enjoy some quality time together.
The pictures of the open doors day can be consulted at the following url:
http://picasaweb.google.com/Touradj.Ebrahimi/OpenDoors2008 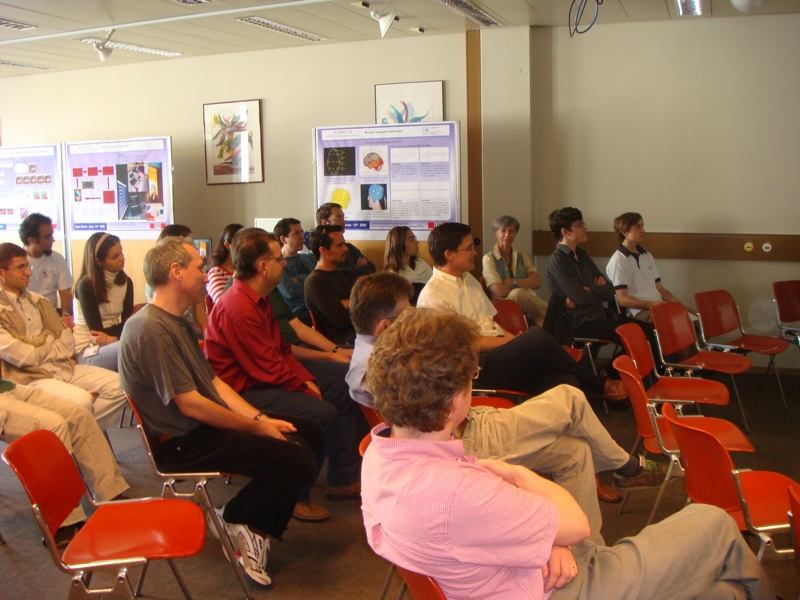 Posted by Touradj Ebrahimi at 0:06
CBMI-2008 and COST292 in London, UK
The 6th edition of the International Workshop on Content-Based Multimedia Indexing (CBMI-2008) took place in London, UK, on 18-20 June 2008. It was hosted by Queen Mary University of London. This was a very interesting and informative event. I was one of the invited panelists there to discuss the future of research in multimedia retrieval.
I have put a copy of my slides at the end of this article for those interested.
More information about CBMI-2008 and a detailed technical program on what was presented and discussed can be found at the following url:
http://cbmi08.qmul.net/

In parallel to CBMI-2008, the Technical Committees and Management Committee of the COST292 also met during the same period to present the latest progress of this Action, and to set up further coordinations. Additional information about COST292 Action can be obtained from the following URL:
http://www.cost292.org/
One of the most active Working Groups in COST292 is WG7/JPSearch which coordinates the activities of this Action towards standardization of image search technologies under the scope of the ISO JPEG committee. I have the pleasure of chairing this activity. Further information about WG7 is accessible in the following url (you need to become a member of COST292 in order to see all the details):
http://tech.groups.yahoo.com/group/JPSearch-COST292/

One of the highlights of CBMI-2008 was a great dinner on board of a boat on Thames river. I took a few pictures of this social event and put the in the following url, together with some other pictures:
http://picasaweb.google.com/Touradj.Ebrahimi/CMBI2008AndCOST292InLondonUK 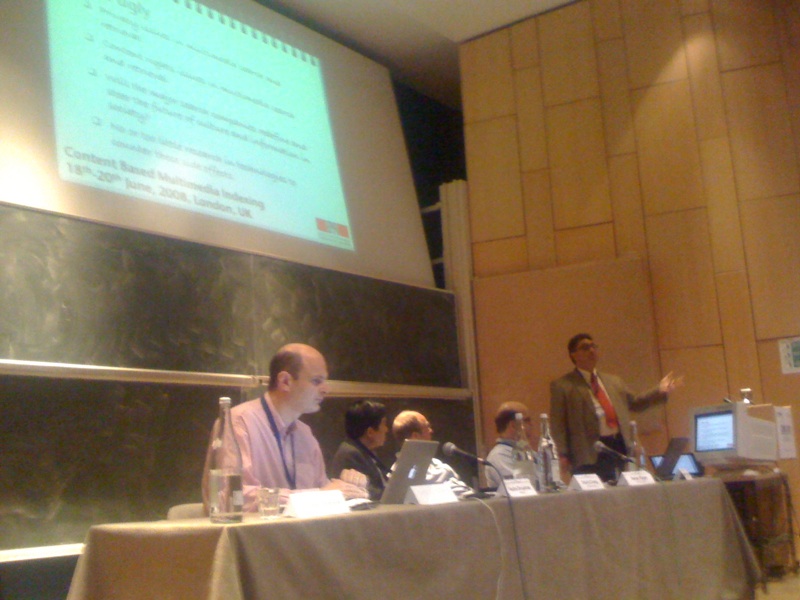 Posted by Touradj Ebrahimi at 9:25
NTNU Digital Cinema movie theater in Trondheim
I had a chance to visit the Digital Cinema movie theater in Trondheim thanks to Prof. Andrew Perkis, a friend and colleague since many years. This visit was most impressive. In fact, as far as I can say, there is no other place in the world I am aware of where a university has access to a movie theater with several hundred seats, and featuring the most advanced 4K digital cinema projector ever built. In this sense, the Norwegian University of Science and Technology (NTNU) is ahead of everyone else, and deserves a big applause. Beside various research in very high quality audiovisual processing for entertainment, NTNU uses this facility also in medical imaging and telemedicine. Andrew and I, together with other faculties, post-docs and PhD students from NTNU have planned some fascinating research which makes use of this unique facility. I hope in near future, I will have an opportunity to report the results in my Blog.
I took a few pictures of my visit that you can consult at the following link: 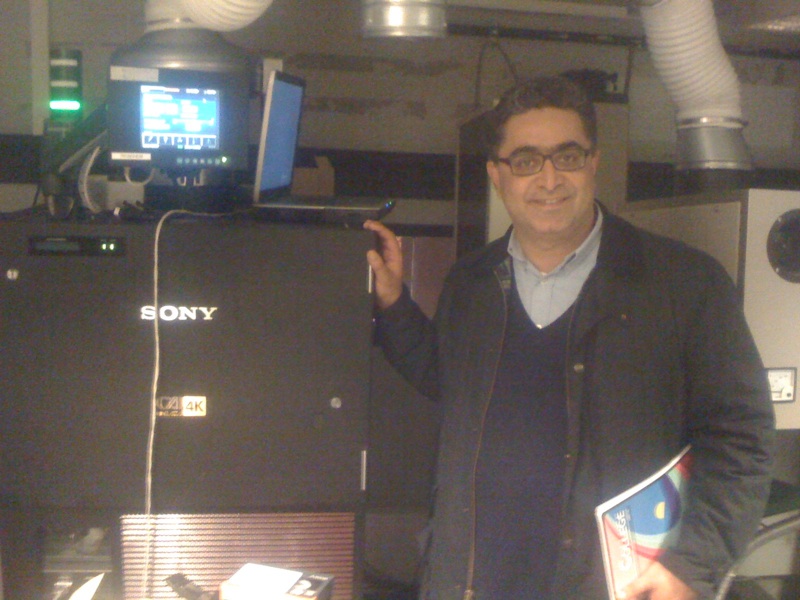 Posted by Touradj Ebrahimi at 8:54
Sixth MMSPL Lunch Meeting
The sixth MMSPL lunch meeting was also a first! Our first barbecue in 2008. This lunch was organized on June 2nd, 2008, by Marija Uscumlic. Despite summer around the corner, because of the danger of rain, the meeting took place indoor, while the cooking happened outdoors. Some pictures of the event are accessible at:
http://picasaweb.google.com/Touradj.Ebrahimi/SixthMMSPLLunchMeeting

Note: Picassa is experiencing problems with public access to albums (google starts having cracks appear in its quality....are we witnessing the beginning of the end?).
So, I moved the pictures to Flickr! If the problem persists, I will move all my past and future pictures to Flickr in the future as well. If the above link does not work, use the following:
http://flickr.com/photos/48356885@N00/sets/72157605507290993/detail/ 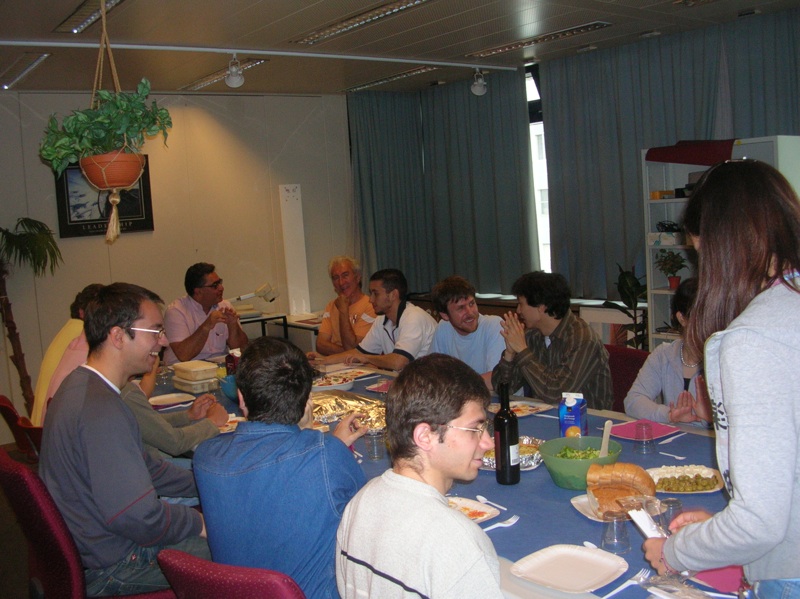 Posted by Touradj Ebrahimi at 8:17
Visnet-II General Meeting in Lisbon
The General Meeting of Visnet-II European Consortium took place from May 14-16, 2008 in Lisbon, Portugal. Visnet-II is the sequel of Visnet, and is a Network of Excellence in the domain of Networked Media within FP7 research program of the European Commission. The consortium has activities around three closely related themes: Video coding, Audiovisual Processing, and Security. Interestingly enough, these themes and the way the project is partitioned in topics is quite similar to the way MMSPL is organized in terms of research topics as well. But in Visnet-II we are involved mainly in video coding, and in video processing themes, which has already resulted into a significant amount of activities from EPFL in this consortium, as a dozen of my colleagues contribute to Visnet-II. Although a network of excellence is not supposed to create any prototype or carry out trials, Visnet-II integrates its research activities under the scope of two application platforms: Video surveillance and Virtual collaboration.
A detailed information about Visnet-II can be found at the following url:
http://www.visnet-noe.org
Visnet-II has regular newsletters published on a monthly basis, with very interesting and informative content. I strongly recommend that you consider subscribing to this newsletter. To do it, go to the above url and follow the link to NEWSLETTERS.
The Lisbon meeting was attended by two of Scientific Advisory Board members of Visnet-II: Prof. Susanne Boll from University of Oldenburg, and Prof. Klaus Diepold from Technical University of Munich, both from Germany. They made excellent recommendations after spending three days with us.
The Lisbon meeting was hosted by Fernando Pereira and his team from IST. As usual with all the events organized by them (I have already reported a couple in my blog: Discover Workshop and PCS in 2007), it was just outstanding.
You can consult some pictures of the event at:
http://picasaweb.google.com/Touradj.Ebrahimi/VisnetIIGeneralMeetingInLisbon 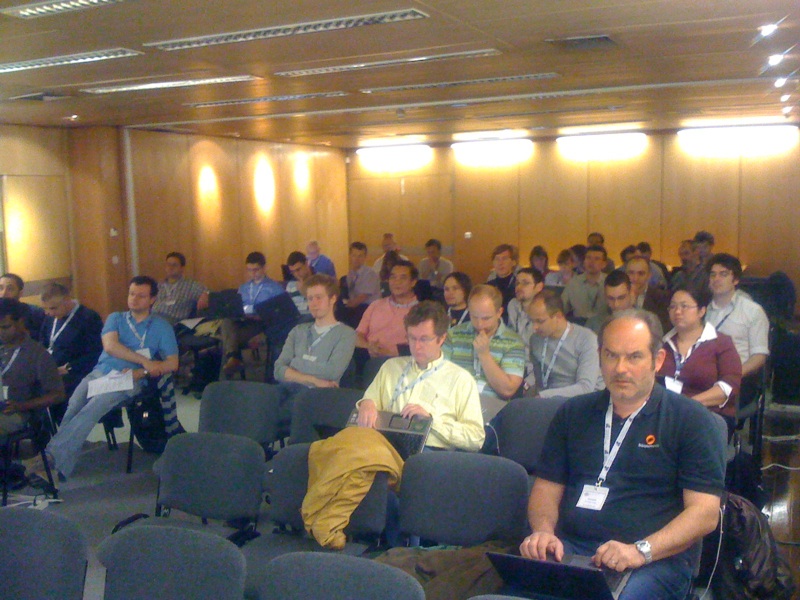 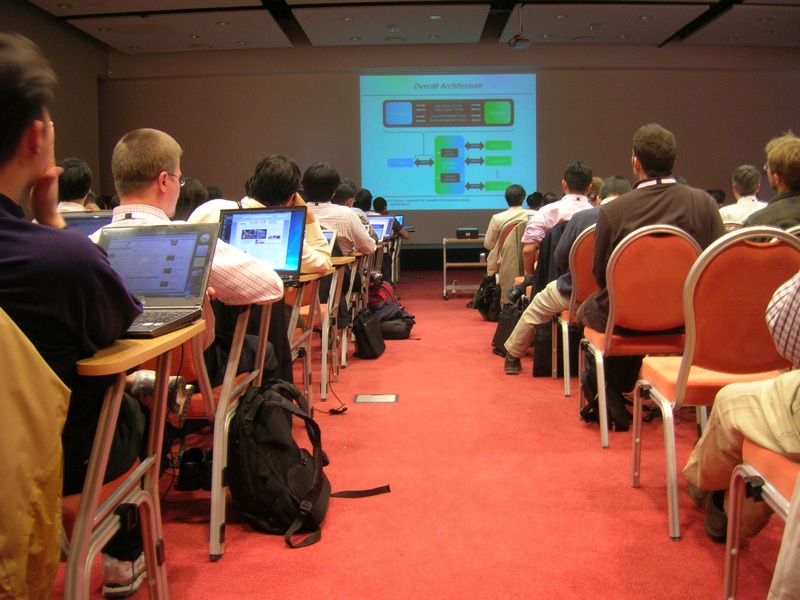 Posted by Touradj Ebrahimi at 18:44
Fifth MMSPL Lunch Meeting
On May 5th, 2008, we had our research group's fifth lunch meeting. This time the lunch was organized by Shuiming Ye, who is a post-doc with us.
You can see some pictures of the lunch at the following url:
http://picasaweb.google.com/Touradj.Ebrahimi/FifthMMSPLLunchMeeting 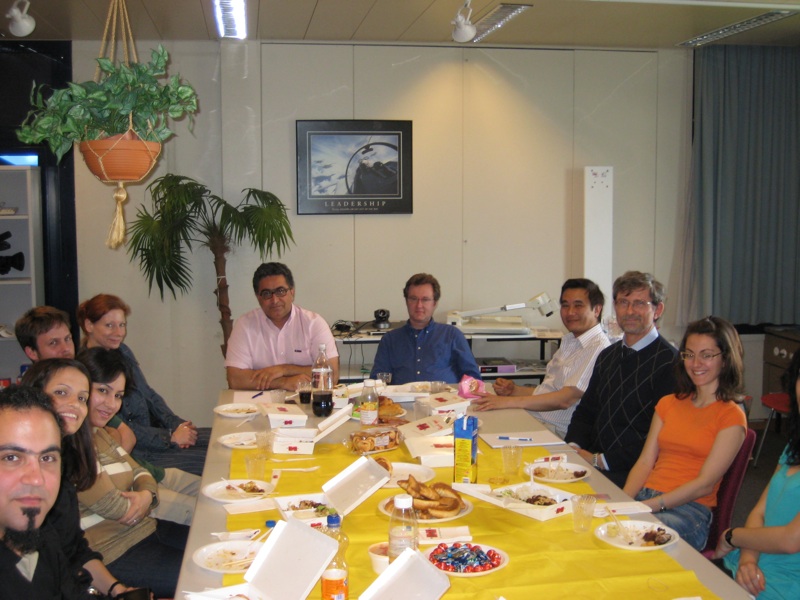 Posted by Touradj Ebrahimi at 18:06
Q2S 2008 Advisory Board Meeting
The Advisory Board of Q2S met with the members of the Center on 19 and 20 May 2008 at a beautiful place called Brekstad about one hour from Trondheim by speed boat. This was an opportunity to discuss the latest progress of Q2S with the scientific advisory board members, but also it was an occasion to enjoy the beauties of Norway.

Those interested in knowing more about Q2S can consult its annual reports of Q2S available from the following site:
http://www.q2s.ntnu.no/annrep.php

One of the highlights of this event was a sailing boat ride and fishing expedition after the first day meeting. This was a unique and exciting experience.
Some photos can be consulted at the following url:
http://picasaweb.google.com/Touradj.Ebrahimi/Q2S2008AdvisoryBoardMeeting

If you thought that Norway is about oil and salmon only, I recommend a visit to this beautiful country. You will be pleasantly surprized.
And by the way, did you know there are great opportunities for talented researchers and Ph.D. students at Q2S? If you want to know more, drop me an email. 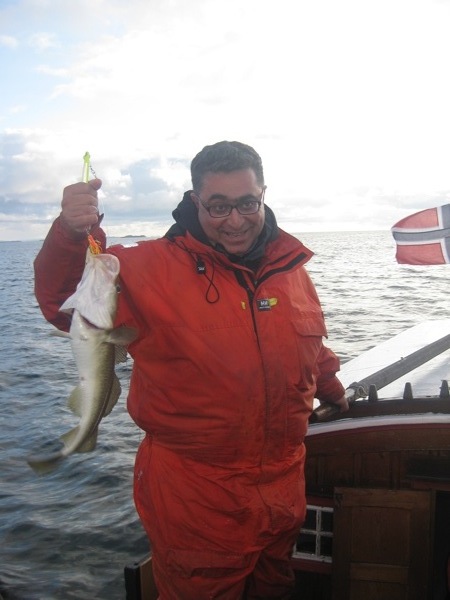 Posted by Touradj Ebrahimi at 22:03
MMSPL forth lunch meeting in 2008
We had our forth lunch meeting on 14th April 2008. This lunch was organized by Gelareh Mohammadi who actually cooked for us some good Iranian food. This lunch was also an opportunity to welcome our new colleague Ivan Ivanov who has joined our group as a research assistant and Ph.D. student.
Some pictures can be consulted at:
http://picasaweb.google.com/Touradj.Ebrahimi/MMSPLForthLunchMeetingIn2008 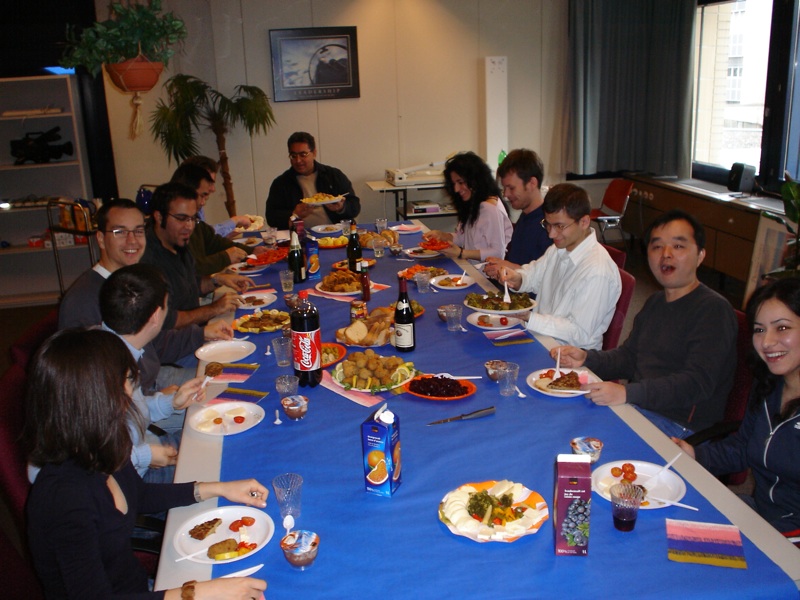