David Marimon passes his PhD exam successfully
My latest PhD student, David Marimon had his thesis examination on October 31st, 2007. He has been working in the last few years on the interesting and challenging problem of tracking feature points (either on a pre-defined marker or just anywhere) in video sequences. Applications for such a thing are multiple, among which one can mention Augmented and Mixed Reality on which David spent some of his time and devoted a particular attention. He also interacted with researchers and students at the Lausanne School of Art and Design (ECAL) in the context of one research project as well as a couple of educational workshops where ECAL students could use Augmented Reality tools to come up with new concepts. He is also behind the creation of a module based on augmented reality concepts on display at the Swiss National Museum of Audiovisual and Multimedia (Audiorama) in Montreux. David has been a very dynamic and active member of our research team. Beside his research activities, he was also involved in teaching duties and contributed valuable input to many collaborative research projects between EPFL and other European institutions. He is such a dedicated and efficient person that in the middle of all these he even found time to design and implement most of the content of the website of our research group, and take care of his Dog!

David's thesis report can be found at the following url:

His PhD defense was attended by a Jury of experts composed of Dr Andrea Cavallaro from QMUL in London, UK, Prof. Fernand Meyer from Ecole des Mines de Paris, France, Prof. Jean-Philippe Thiran, from EPFL, and Prof. Sabine Susstrunk from EPFL, who also chaired the examination.
All in all, the examination went very well and the jury was very satisfied by the result to the extent that it unanimously proposed David's to be considered as a candidate for the best PhD thesis in 2007.

The slides of David's thesis defense can be found at the following url:

To know more about David and his activities, please refer to his home pages at: 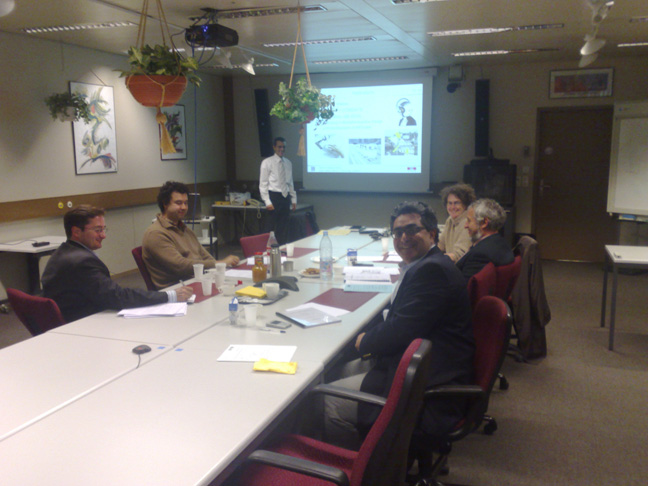 Posted by Touradj Ebrahimi at 9:33
Workshop on Multimedia New Technologies and Applications
Right after the MPEG meeting in China, a workshop to present some of the latest technologies and applications in multimedia was held on October 27th, 2007, in Shenzhen. I had the pleasure to act as the chairman of this workshop and interact with the members of the organizing committee: Joern Ostermann from Leibniz Universitaet Hannover (Germany), Fernando Pereira from IST (Portugal), Huifang Sun from MERL Technology Lab (USA), Wen Gao from Beijing University (China), Lu Yu from Zhejiang University (China) and Lianhuan Xiong from Huawei Technologies Co., Ltd. (China). Several experts from MPEG and elsewhere presented the latest developments in standards for multimedia, with the majority concentrating on MPEG standards. The program of the workshop can be found at the following link:

The slides of presentations made at the workshop can be found in the following link:

You can also visit the following url and have a look at the pictures taken at the Workshop:

Send me comments and give me your opinion about this workshop. 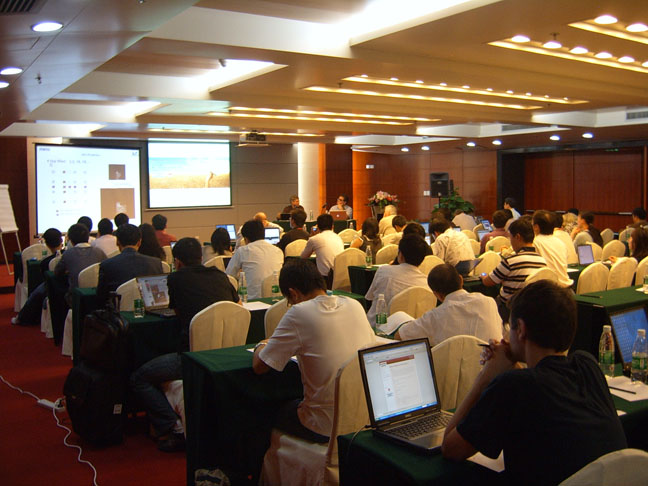 Posted by Touradj Ebrahimi at 16:23
MPEG and JPEG in Lausanne congratulate Team Alinghi for their victory
MPEG and JPEG are among some of the most active standardization committees ever and both have had a significant impact in the way consumers and professionals deal with information. It is said that more than 90% of the images circulating on the web are in JPEG format, virtually all digital still picture cameras use this format, and it is hard to find an image editing software which does not read and produce JPEG files. MPEG-2 has already been used as THE format of the choice in digital TV, HDTV, and DVD. The newly developed MPEG-4 is found in almost any mobile phone with multimedia capability, and more recently, MPEG-4 AVC, also known as H.264, is starting to be deployed instead of MPEG-2 in broadcasting applications, and in high definition DVDs. This has been all possible thanks to the efforts of some 400+ experts in coding in the world, gathering 3 to 4 times a year in the most diverse locations in the world. In July 2007, both MPEG and JPEG met at EPFL campus to work on the future standards in imaging and video. It was not the first time MPEG and JPEG experts came to Switzerland to meet. JPEG has had meetings in Geneva, a couple of times in the past, and MPEG even more, in Lausanne, in Geneva, in Fribourg and in Montreux. But this was the first time both committees came to Switzerland at the same time and in a same location. Many progress was made in the works of both groups. MPEG is now working on 3D extensions of its original standards in both multiview and free view TV applications. JPEG also officially started a new work item called JPEG-XR which aims at standardizing compression techniques for coding of high dynamic range images (images with precisions beyond 8 bits per pixel per component). Also both groups decided to consider standardizing methods and algorithms for archival of audiovisual content. The venue of MPEG and JPEG meeting in July coincided with a couple of other interesting and exciting events. First, during the week of July 2007, and while the committees were busy working, the Swiss Sailing Team Alinghi was also busy racing in Valencia against team New Zealand for the America's cup. Some of the experts could see the races in direct on large screens installed in EPFL and join the exciting events. Of course, Alinghi won in a close race but well deserved victory. To celebrate this victory, each MPEG and JPEG delegate received an Alinghi cap. The picture below is a gift from MPEG and JPEG experts to the Team Alinghi for their achievement. An achievement which is the result of an exemplary team work but going beyond the boundaries of the state of the art in technology through hard work and ingenuity. MPEG and JPEG experts are well positioned to appreciate such challenges as they seek the same in their everyday lives. 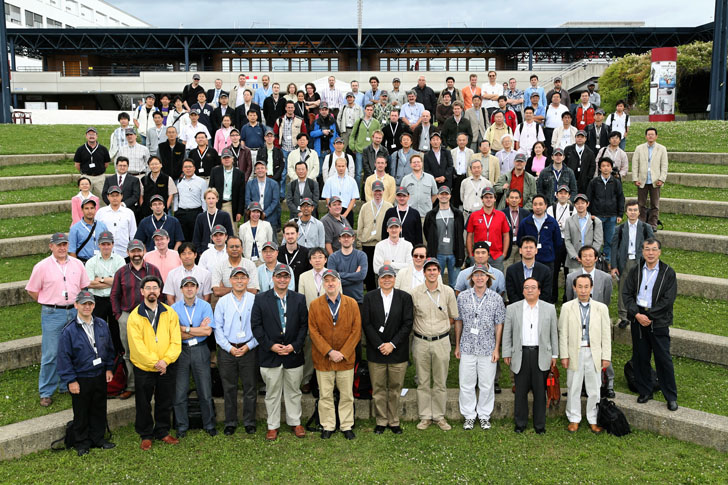 Posted by Touradj Ebrahimi at 5:09
Hello World!!!
Here comes the first article. It will be very short this time.
To start with, I have decided to maintain a blog about my various activities (both professional and personal), and share my thoughts and experiences with whoever wants to know about it.
I am creating this blog just the day before departure for Shenzhen, China, to attend an MPEG meeting. I hope you will visit again this blog. Look around, send me a comment, or register to receive a message when I create a new article.
Was it too short? Well....let me just add my bio below in case you want to know more about the person behind this blog.
Use the links at the end if you are curious to know more about me.

BIO
Touradj EBRAHIMI received his M.Sc. and Ph.D., both in Electrical Engineering, from the Swiss Federal Institute of Technology (EPFL), Lausanne, Switzerland, in 1989 and 1992 respectively. In 1993, he was a research engineer at the Corporate Research Laboratories of Sony Corporation in Tokyo, where he conducted research on advanced video compression techniques for storage applications. In 1994, he served as a research consultant at AT&T Bell Laboratories working on very low bitrate video coding. He is currently Professor at EPFL involved in research and teaching of multimedia signal processing.

He has been the recipient of various distinctions such as the IEEE and Swiss national ASE award, the SNF-PROFILE grant for advanced researchers, Three ISO-Certificates for key contributions to MPEG-4 and JPEG 2000, and the best paper award of IEEE Trans. on Consumer Electronics . He became a Fellow of the international society for optical engineering (SPIE) in 2003. Prof. Ebrahimi has initiated more than two dozen National, European and International cooperation projects with leading companies and research institutes around the world. He is also the head of the Swiss delegation to MPEG, JPEG and SC29, and acts as the Chairman of Advisory Group on Management in SC29. He is a co-founder of Genista SA, a high-tech start-up company in the field of multimedia quality metrics. In 2002, he founded Emitall SA, start-up active in the area of media security and surveillance. He is or has been associate Editor with various IEEE, SPIE, and EURASIP journals, such as IEEE Signal Processing Magazine, IEEE Trans. on Image Processing, IEEE Trans. on Multimedia, EURASIP Image Communication Journal, EURASIP Journal of Applied Signal Processing, SPIE Optical Engineering Magazine. Prof. Ebrahimi is a member of Scientific Advisory Board of various start-up and established companies in the general field of Information Technology. He has served as Scientific Expert and Evaluator for Research Funding Agencies such as those of European Commission, The Greek Ministry of Development, The Austrian National Foundation for Scientific Research, The Portuguese Science Foundation, as well as a number of Venture Capital Companies active in the field of Information Technologies and Communication Systems. His research interests include still, moving, and 3D image processing and coding, visual information security (rights protection, watermarking, authentication, data integrity, steganography), new media, and human computer interfaces (smart vision, brain computer interface).

He is the author or the co-author of more than 100 research publications, and holds 10 patents. Prof. Ebrahimi is a member of IEEE, SPIE, ACM and IS&T.